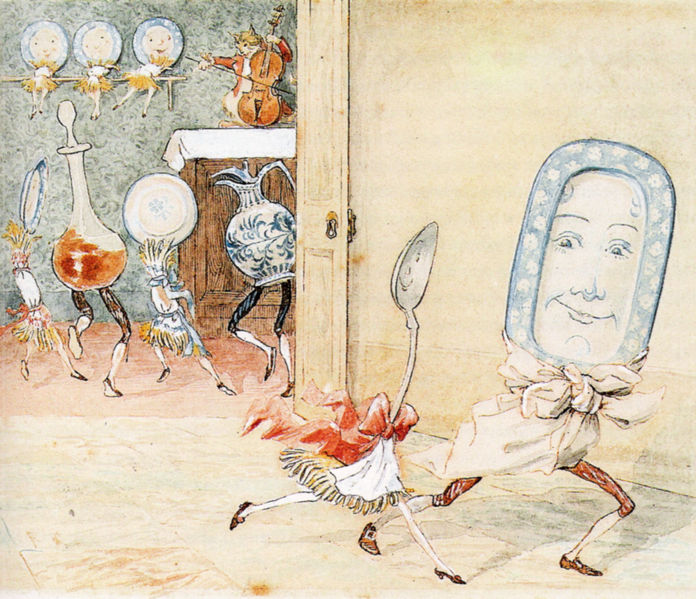 And The Dish Ran Away With The Spoon by Randolph Caldecott

Once upon a time two little teaspoons went missing, or so the Lady of Cutlery thought. She didn’t bother to look for the little teaspoons. She wasn’t really the least bit interested in the welfare of the teaspoons at all. Her only interest was in the fact that she believed them to be missing, and that someone else was to blame for the crime against cutlery. She was very angry. Livid. Her rancour needed an outlet. So she sought out a vessel into which she could pour her fury.

A child wandered into the kitchen and was immediately chosen as the Keeper of the Blame. An honour perhaps. The child was not sure at first, but two hours later, after listening to a seemingly interminable screaming lecture, it did not feel like an honour at all.

The Lady of Cutlery was certain that the child had misused the very valuable little inexpensive stainless steel non-heirloom teaspoons. Obviously after eating a pot of yoghurt, the child had thrown away a teaspoon with the empty pot. And committed this crime not once, but twice. It was a certainty which did not need proof. The Lady of the Cutlery did not need such paltry things as proof to throw accusations around, and find one worthy of blaming.

Eventually the child grew bored of being the Keeper of the Blame of something they were certain that they had not done, and they unraveled the mystery of the missing little teaspoons, by proving that they were not missing at all. The Lady of the Cutlery had thought wrongly that there were six teaspoons in the cutlery draw when actually there had only ever been four, and all four were still safely in their section.

The Lady of the Cutlery was a bit embarrassed, but these sort of misunderstandings happen and children need to learn from them. Cutlery was something to be taken seriously and any crimes committed against them were severely punished.

The child sighed. This was not the first time they had been accused of crimes they had not committed, and it would not be the last. The Lady of Cutlery was also the Screamer when Glasses get Broken. The Yeller when Juice was Spilled on Carpets. The Hater of Fingerprints on Glass and Footprints on Tile Flooring. And many other very vitally important roles.

The child was never allowed to get away with anything, especially things they had not done.

Many years later the child grew up and realised what a psycho the Lady of Cutlery and all her other roles was. And decided that the most important lesson learned from all the misunderstandings which had happened was that there are certain things which are not important and not worth getting upset about.

When spoons go missing, perhaps they had a place to be and went there. When glasses get broken, as long as no one is injured during the breaking, then it is just an object seeking reincarnation therapy. Things spilled on carpets, are just memories painting themselves on the canvas on the floor. And fingerprints and footprints are the signs that those to whom they belong were there momentarily, living, breathing, and doing. A beautiful proof of life.

So, Do you have any stories of missing teaspoons or similar issues of importance to share?