The Season of Pegasus 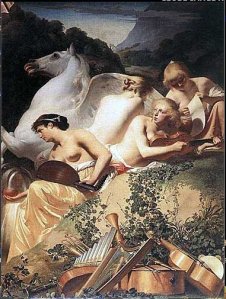 I live in the countryside. How lovely! Miles and miles of fields. Deer roaming freely, and the chance of being bitten by a tick. I found one on my stomach once, but it was squashed because I had been lying on top of it and the ground was hard because it had been unseasonably dry.

My house is caught between fields and woodland. How wonderful! Did you know that insects absolutely love woodland? Damp, dark and the perfect breeding ground for such an array of bizarre creatures. Most of them don’t give a hoot about humans. So all is copacetic. Sort of.

I used to be Cousteau obsessed, and I remember reading their book about their Amazon adventure, wherein they kept an account of insect related anxiety attacks. Made me chuckle then, makes me chuckle now too. The insects in the Amazon are monsters compared to the ones here. But there are things like Cockchafers (teehee) who are pretty fierce, especially when they crash into you. Fierce creatures. Still, they’re fairly harmless. 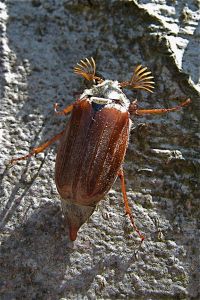 There are plenty of mosquitoes, who are slightly odd because they haven’t mastered the art of stealth blood sucking. When their stinger goes in it hurts, so they get squashed. They also seem to prefer covered skin to exposed skin. Not sure why, seems a bit silly.

Hornets and wasps love this place. I could give Usain Bolt a challenge when I’m escaping from one of them. I know, you’re not supposed to run away screaming hysterically waving your arms around wildly, but… there are a lot of things you shouldn’t do which get done anyway. Hornets are not so bad, they’re very intelligent and really don’t bother with humans unless humans bother them, but have you listened to the sound they make… shivering spines it’s a loud thrum! Hornets remind me of Summers spent in warmer climes, hiding underwater because I’d pissed one off. Me waiting for it to get bored, it waiting for me to run out of air. Wasps, on the other hand, are a pain, so damn social and such. What you drinking human? Can I have a sip? What’s that you’re eating? Looks very tasty, mind if I land on it and wander all over it? Never go hiking (wanderweg-ing) in Switzerland in late Summer if you have a wasp phobia or you might end up being remembered by a small wooden cross on a hiking trail.

There are so many different types of fly that I am rather fascinated by them as well as irritated. Robber flies are very cool, they look like ninjas if we knew what ninjas looked like being invisible and all that. I almost drank one today because it stole some of my energy drink and I wasn’t looking when I went to take a sip. 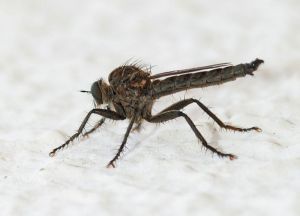 Woodland flies are particularly annoying. They form packs and just buzz around you, occasionally creating fly halos around your head. It is slightly insulting, I feel as though they are telling me that I stink of carrion or something. They may think that it’s a compliment.

Summer here can be temperamental and brief. Fleetingly beautiful. When the Sun is out it tends to be in a sky of hazy blue because the heat makes the dampness rise into a fine gossamer curtain between Sun and a human trying to catch some rays. Whinge whinge. I am a redhead with freckles so I really should thank the Sun for not being scorchio, and protecting me from my own stupid desire to lie under its rays and burn myself. However I like to watch as my freckles grow dark and expand joining together to turn me into one giant freckle. I like being a giant freckle. Freckle haters are just oblivious to the joy of freckledom!

The one curse and herald of Summertime is the horsefly. I can’t even begin to explain how much these things freak me out. It’s not the fact that they want to drink my blood (said in a Transylvanian vampire accent), lots of insects seem to enjoy a tipple of human blood and some human blood sacrifice is necessary as a ritual element of enjoying the Summer weather… what freaks me out is how they fly. How insistent they are. How hard they are to shoo away. They are very ambitious and nothing is going to get between them and their target. They are also extremely hard to squash. Very quick and dexterous. They can flatten themselves flatter than a cockroach.

In some parts of the world horseflies are huge, these ones are tiny like ordinary houseflies, but… I killed my first one today. Bad karma, but… *shrug. I would show you a pic of it, but it is squished beyond recognition. I went a bit overkill. That’s how much they freak me out.

However others are not so skittish and panic stricken as I am.

So it’s officially Summer in these here parts, and we’re supposed to have an unusually long and hot and sunny one this year! Yay! Oh shit!