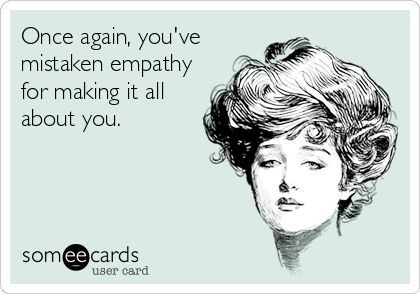 Ever notice how some people maintain their image of themselves by making others responsible for the parts of themselves which they can’t accept. Especially emotions. They project what they are feeling but do not want to feel into others. However they are usually not satisfied with discarding these uncomfortable emotions, they need the other person to act them out for them, to express and release them. If the chosen receptacle does not cooperate, they will poke and prod, nag and whine, harass, badger, and do whatever is needed until the person does what they have been designated to do.

These people are often very caring, very sensitive, tuned in to the feelings of others, or so they say. They will often sigh heavily and complain, bragging disguised as complaint, about how difficult it is for them to be around other people because they pick up the emotions of others, it is a gift with an enormous price, and sometimes they can’t tell the difference between what they are feeling and what others are feeling.

They are always very concerned about others, about what others are feeling, sometimes to the point of trying to control how, what, and when others feel.

‘Fine,’ you reply, genuinely, not saying fine for the sake of not wanting to go into how you are feeling, but saying it because you feel fine and that’s that.

‘No, you’re not fine, I can sense that there is something wrong, tell me what it is,’ they insist, giving you one of those slightly condescending looks of knowing you better than you know yourself.

‘No, there is nothing wrong, I’m fine,’ you affirm, a bit puzzled, wondering if perhaps you are emanating something that you didn’t know about, a seed of doubt planted in your certainty of being fine, your feeling of fineness beginning to ebb away.

‘Don’t lie to me, come on, it is better to tell the truth than to lie, I can handle it,’ they insist, this time giving you a pleading look, begging you to have something wrong with you. ‘I really want to know, tell me what’s wrong, you can trust me, let me help you, I care about you.’

You hesitate. What do you do. Even with the seed of doubt trying to take root, trying to ruin your fine feeling, you are still able to hold onto your actual feeling rather than replace it with the one you are being subtly hypnotised into having. You are fairly certain that on this particular day, at this particular time, you are fine. In fact you were enjoying the feeling of being fine.

But this person is very insistent, they’ve told you over and over again how they have an almost magical ability to know what others feel, they are never wrong, they know this because they push others until those others express the emotions they decided that those others had.

And you’ve been trained to care about what people think of you, what others feel for you. You also know that when someone cares for you, keeps telling you that they care for you, that… well, it’s nice to be cared for, and you owe them for caring for you. It’s a contract of sorts. And you care about pleasing others because it feels good to care, yet sometimes… sometimes caring can feel like a burden and it would be preferable to shrug it off and not care for a while. It would also be quite pleasant not to have to shoulder the responsibility of the caring of others, especially when their caring feels uncaring.

After all, as much as this person keeps telling you how caring they are, and how much they care for you, their actions contradict their words and their image of themselves. If they really cared for you they would be happy for you that you are feeling fine rather than trying to rob you of your fine feeling by insisting that you are wrong about yourself, and that you are definitely not fine. They would know that you are not always fine, and that when you are you want to enjoy it. If they truly cared, would they not encourage your feeling of fineness, perhaps share it with you, let your feeling seep into them and lift them up, rather than force you to feel they way they are feeling, the way they want you to feel, and drag you down.

But how do you tell someone who is convinced that they are caring of others, that they are very perceptive and intuitively know what others are feeling, that they are wrong, that they are not picking up the emotions of others at all, that what they feel is their own emotions which they have projected into others because they have a bit of an issue with emotional accountability and responsibility. They are afraid to feel, so they force others to do the feeling for them.

But you know you can’t tell this person anything other than what they want to hear, they won’t listen if you do. You’ve been here before, you’ve tried to be open with them, tell them the truth they claim they want to hear, but never accept, because your truth is always a lie to them, only their version of the truth is acceptable. And you can see how much they desperately cling to this image they have of themselves and saying anything other than what is in the script they have given you to follow will threaten to tear their reality to shreds. And doing that would be cruel, and you care about them and don’t want to hurt them more than they already have been hurt and are hurting themselves.

You know from experience of past interactions of this sort with this person that they will be deeply hurt if you don’t find something wrong with yourself to give them. They need you to be not fine.

So. Do you think of something which is wrong with you to please them? Do you ruin your day to make their day?