An ordinary piece of plastic. 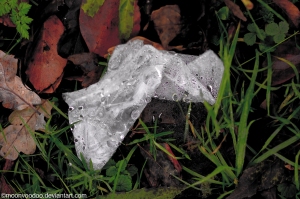 Manmade litter in amongst nature’s leaf litter. Something ordinary, so much so that your eyes don’t see it. Or maybe they do, but it’s an ugly aberration which you might react to by grumbling at whoever dropped it if anyone is around to be blamed for doing such a thing, you might decide to ignore it, you’re busy on your way from A to B, don’t have time to save the planet from a small piece of junk, if it’s still there later, maybe… or your brain sends a signal to the rest of the body, you bend down, pick it up, pinching it between fingertips because, yuck, it’s garbage and not yours so… extra yuck, it might be diseased, then into the bin it goes and becomes someone else’s problem in a different area. Nimby logic. Okay, you put it in the recycling bin and it will be transformed into something else which will be of great use, not like this piece of litter.

But what if within the expected flaws of human life, the litter, the rejected stuff, was unexpected beauty?

A spider has made this piece of discarded plastic part of its web.

The evening mist decorated it with droplets.

Look a little closer and it becomes a cavern of jewels, a kingdom of wonder. An unexpected treasure trove.

Or maybe I’m just being fanciful.