A Blessing in Disguise… of a Curse!

I shared this Chinese allegory with a friend in a comment on one of my posts, and I thought I’d share it as a post, because this tale made all the difference to my thinking at a time when I really needed it.

I was one of those people who came to suspect that somehow karma had it in for me. Maybe I’d been a very bad person in a previous life and this was accumulated bad karma asking for its dues or maybe… I’m just lucky where bad luck is concerned. Whatever the case, I was wallowing in a mire of mud of depression and feeling hard done by by life’s challenges.

Then I happened upon this allegory in a book, now available freely on the internet:

There once was an old man who lived with his only son at the border of the state. They liked horses and often let them graze freely. One time a servant reported to the old man, “A horse is missing! It went into the neighboring state.”

His friends felt sorry for him, but the old man was not bothered at all by the loss. In fact, he said: “Who knows! The loss may bring us good fortune!”

A few months later, a weird thing happened. Not only did the missing horse return home safely, it also brought back with it a fine horse from the neighboring state.

When his friends heard the news, they congratulated the old man on his good luck. But the old man said, “Who knows! This may bring us ill fortune!”

One day, when the old man’s son was riding the fine horse, he fell off it, broke his leg very badly and became crippled. Many friends came to comfort the old man, but the old man was not disturbed by the accident in the least. “Who knows! This may bring us good fortune after all!” he said.

A year later, the neighboring state sent troops across the border. All young and strong men were drafted to join the fight, and most of them got killed. The old man’s son however was not drafted because he was crippled –  and so his life was spared.

I don’t know what it was, other than the brilliant logic of it, which changed my perspective. Suddenly I saw the good in the bad… and the bad in the good, and realised that nothing was black or white… that black had white in it and white had black in it and bad had good in it and good had bad in it… and the hues between the two extremes opened up to me. The Yin Yang symbol suddenly made sense! 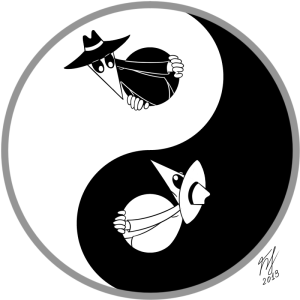 Yin and Yang by Minish-Sapidus

I’m a pessimistic optimist and an optimistic pessimist, and the twain meet for tea and cookies regularly.

One of my best thinking and re-thinking my thinking moments ever!