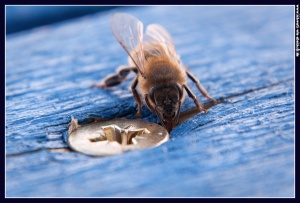 What is that bee doing in that photo? Looks like there’s a stash of something yummy in that crevice. Love that shot!

I was going to use one of my own bee photos for this post but I don’t have time to go through my archives – doesn’t help that my filing method is a chaotic one. I started off really tidy… no I tidied up my original mess, then fell back into my old ways due to being too busy to keep the tidy system up, and now I can’t face tidying that half-tidy half-mess up. I’d delete all my photos and start again from scratch if that wasn’t such a dumb idea.

Just before the weekend I got a whole load of work to do on the ongoing saga of my life which started at the beginning of 2013 and just refuses to get sorted out quickly. I can huff and puff as much as I like and turn blue – like that beautiful blue in the photo – in the face, but it doesn’t solve anything, just makes me breathless and dizzy.

Then at the weekend I received one piece of news after another which bouleverser’d my life. Sorry for using bad French (bad as in I didn’t conjugate it), but that word expresses how I felt perfectly. I could have just said that an upturned soul has once again done a topsy-turvy revolution. One of the news items is the kind which takes that comfort zone I’d only just finally relaxed in and turns it into a discomfort zone. I have to move. Physical location move. Ugh! I’d only just got used to this place and how things work and don’t work! This is the first Winter in this house where I’m not at risk of frostbite.

How many times have I told myself not to relax ever!!! If life thinks you’re looking a little too relaxed, it means you’re not busy and therefore have time to do something. 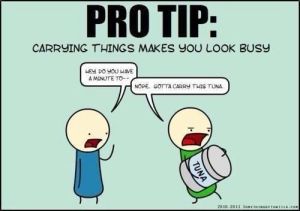 But at some point you just do relax, either natural relaxation or your on guard muscles give out and force you to relax… and then you have to move. This is a pattern in my life. I’ve moved around a lot, lived here, there, not there or there, but sort of not quite everywhere – big gaps in the everywhere. I’m used to moving and I never get used to it. I love it and hate it. Hate packing so much when I dream about it I wake up screaming, drenched in sticky sweat and frustrated.

Did I say – bring it on – to the universe lately? I must have done. I’m actually more relaxed than I would have been a few months ago, this was always a possibility considering everything else, I just wish this had happened later, as in sometime towrds the end of this year rather than at the start. But… things are copacetic. Self-hypnosis – On!

I don’t usually tell people I’m busy. It’s one of those things that’s not necessary to say.

When people tell me they’re busy… I tend to step back and stare at them as though they’re crazy to say it.

Everyone is busy, busy, busy, it’s kind of hard to miss, so it’s stating the bleeding obvious to say it.

It’s just I think some people are under the impression they’re either the only busy person in the world and the rest of us are lying on the grass making shapes out of clouds, or their kind of busy is superior and special to everyone else’s.

So when they say they are busy, it’s – I’m VIP busy… fnar fnar… you’re on the wrong side of the velvet cordon of busy, thus you’re the hoi polloi of busy, thus your busy is not of value, not real, not my kind of busy. My busy is of the holier than though kind! 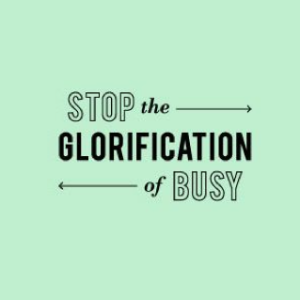 Or maybe I just hear everything people say to me as though I’m in a Monty Python sketch. There are comical sound effects…

What was this post about? I get this strange feeling… that while I’m busy doing this something else is busy not being busily done. Or maybe I already did it… I can’t recall.

Hahaha! Love that quote above… yup! If only…