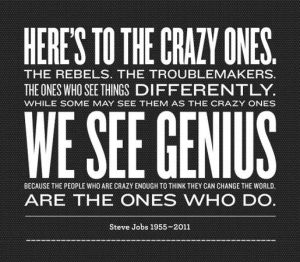 You know this quote. This quote is iconic. This quote has been doing the rounds since it was first quoted and heard.

It’s also probably the canniest marketing ploy ever. Pure capitalistic genius! And it doesn’t matter if you’re reading this on a Mac or PC, if you bought into it or not.

Here’s the thing… we can all relate to this quote.

Except maybe for you… you at the back there, keeping yourself apart from the crowd, you know who you are, you think this quote is a con and everyone is buying into it.

Everyone else thinks they’re the crazy ones, the rebels, the troublemakers, the ones who see things… but they don’t see the fact that their thinking differently is the same as everyone else.

But you do because you are the embodiment of the first half of the quote… the second half of the quote is the part you know is a very appealing trap which a true crazy one, rebel, troublemaker and seer of things differently would never fall into because…

The world doesn’t need changing… not by humans anyway. Look at the mess we’ve caused by thinking we can change the world! By trying to change the world and the people in it to suit us so we’ll feel better about ourselves. Make the world our comfort zone.

Here’s to you at the back there…

If you haven’t seen this film – SLC Punk (1998) – and want to watch it, then the following video is a spoiler, so don’t watch it… unless you’re a rebel.