“Anticipatory plagiarism occurs when someone steals your original idea and publishes it a hundred years before you were born.” ― Robert K. Merton

In an episode of Suits – She Knows | season 2, episode 1 – a TV series about corporate/business lawyers which is brilliantly written, directed and acted – a woman sued the publishing company for which she used to work for stealing her idea for a book which she was planning on writing and giving it to one of their authors to write and publish.

She is furious. She feels that her intellectual property was stolen from her. She is heartbroken by the betrayal of her boss whom she considered a friend and confidante. But most of all she is terrified because she fears that the idea which she had may be the only idea she will ever have, and this fear causes her to believe that her life, her future as a published author, has been stolen from her with the theft of the idea. She keeps repeating that belief as her reason for her lawsuit.

This lawsuit is standing in the way of a merger, and realising the powerful position which she is in, this woman refuses all settlements however generous they are, turning her quest for justice into personal vendetta. Since her life is ruined, she will ruin the company, her ex-boss’ career… and the lives of all its employees. Her righteous indignation needs mass human sacrifice. 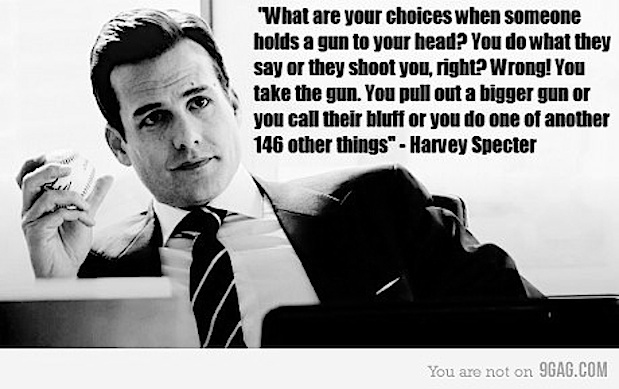 The lawyer in charge of trying to end the lawsuit, while having a conversation with his grandmother, wherein she reveals that a story which she told him about herself was actually a fabrication based on Hansel and Gretel, realises that even when an idea seems original it often is just a variation on an existing idea. He decides to apply this concept to the lawsuit, and manages to find three books by different authors whose stories use the very same idea as the one being fought over in the lawsuit which were published by the publishing company years before the time when the woman claims she had the idea.

Thus her idea is not original at all, she just thought it was because it seemed that way to her when it popped into her head. Chances are she read those books, then forgot she had and that’s from where the idea originated.

The woman almost does a Rumpelstiltskin. Her precious name has been found and spoken. Her version of reality popped by the sting in her own tail. She too is was idea thief, a plagiarist.

“A wise man will always allow a fool to rob him of ideas without yelling “Thief.” If he is wise he has not been impoverished. Nor has the fool been enriched. The thief flatters us by stealing. We flatter him by complaining.” ― Ben Hecht

There was a lot more to the storyline of this episode, in fact this was a just side story to the main plot. But this is the bit which stood out for me, the part I remembered and thought about afterwards.

Copyright and plagiarism, idea theft, intellectual property, imitation, forgery, and other versions of this concept have been a part of my life and conscious awareness since I was a child.

And not just because a part of human development is mimicry and learning by copying others, but for a million other reasons too which I’m not going to go into for brevity’s sake.

The reason I’m writing this post is because I was encouraging a friend to create a blog and they said this to me – Ursula you are SO BRAVE: people might steal your ideas, use your pictures and you always have interesting things to say, even when you say you haven’t! – which is a wonderful compliment. Thank you.

My answer is in what I said in my Copyright blurb on my blog:

Anything which I post that is my own creation is under a Creative Commons license.

With my writing you are free to share, alter, and do what you please with it.

With my photography you are free to share it and use it, but not alter it, mind you if you did I probably wouldn’t find out anyway.

A link and attribution is always gratefully appreciated.

Anything which I post that is the creation of others will be credited to their creator, and linked to source.

If I post something of yours, and you wish for me to remove it, let me know and I will do so immediately. I do not intend to offend or upset, just share the things which inspire me.

A couple of people have asked me if I minded if they used my ideas, and I always reply with something along the lines of – Take what you need, what inspires you, and make it your own, after all what you see in my idea is simply recognition of an idea within you. Make the idea yours and grow it, develop it, share it and pass it on. – I always appreciate the request. Thank you.

I’m not being as selfless or generous or careless or stupid or naive as it may seem. I have been told that I’m altruistic, and some people have observed that I appear to have no ego. Appearances and impressions can be deceptive, not necessarily in a bad way.

I have thought this attitude through logically, using my kind of logic. If I worry about people stealing my ideas, photographs, words, then I will start to restrict the flow of my self-expression with concern. I do have an ego, I’m not being altruistic, I am being selfish, not necessarily in a bad way.

I do value my ideas and creations, they mean a lot to me and are deeply personal.

“There was no crime in unconscious plagiarism; that I committed it everyday, that he committed it everyday, that every man alive on earth who writes or speaks commits it every day and not merely once or twice but every time he open his mouth… there is nothing of our own in it except some slight change born of our temperament, character, environment, teachings and associations” ― Mark Twain

If you were to take one of ‘my ideas’ from a post on my blog, such as saying that a relationship with a Narcissist has – a gift in the curse – I can give you the history of where that came from and credit most of those who inspired it and explain why and how. I have actually done that in a few posts. But it’s not something which I need to do because as soon as anyone reads those words – a gift in the curse – you know exactly what it means and have a million reference points for it in your own life and in the lives of others. It is a universally human concept which our most ancient ancestors had and those in the future will also have. It has been passed down from generation to generation.

Being human requires us to learn this lesson and to do the alchemy which makes the best out of the worst, turns tragedy into opportunity and so on.

If there is something which I consider too precious to share, mine, mine, mine, and mine alone, I simply don’t share it. I don’t need to share it, chances are someone else, maybe several someone else’s past and present. also has it, had it, and may share it, has already shared it.

I also consider other people to be personally accountable and responsible for their actions. Most people are, those who aren’t… well, they’re going to do whatever they are going to do whether I copyright my stuff or not. They have the right to be that way, I have no intention of trying to change them, that’s not my problem, if I have a problem with it, then I change myself. It’s the easier path to a solution.

I do find it curious though, that the people who are most paranoid about other people stealing and plagiarising their ideas are also the ones most likely to steal someone else’s idea and pretend it is theirs without ever giving credit to the person who inspired them. It’s not really a curiosity, it’s typically human, we are always afraid of others doing to us what we do to others, we think others think and are as we think and are.

“Never lend books, for no one ever returns them; the only books I have in my library are books that other folks have lent me.” ― Anatole France

But as much as we have similarities, we are not the same, we are unique and individual, we do however share in that bubbling and boiling pot of inspiration known as the collective consciousness. Don’t believe in it? Lots of minds don’t.

I like to browse goodreads, and use it as the source of many of the quotes which appear in my posts. It’s a great muse when the idea bank is empty. When I search for quotes connected to a particular concept it always amuses me to find the same idea repeated by several different authors, and I wonder how many other people have had the same idea but whose quote is not on goodreads:

“Stealing from one author is plagiarism; from many authors, research.” ― Walter Moers

“To steal ideas from one person is plagiarism; to steal from many is research.” ― Steven Wright

“Forgive plagiarism, copy one person’s thoughts, you are a plagiarist…. if it is by more than one, it’s a council! (may have “borrowed this, too!”)” ― Robert Armstrong

“To steal ideas from one person is plagiarism; to steal from many is research.” ― Michael Hopkins

Austin Kleon has a book – Steal Like and Artist – and a website – austinkleon.com – where he shares the fruits of his creative… stealing!?

Perhaps he was inspired by…

Maybe he even credits his source of inspiration… I haven’t delved deeper than a skim (uh oh).

My favourite idea of the free sharing of ideas – pulled from the World Wide Web of information sharing created by Tim Berners-Lee – is this gem: 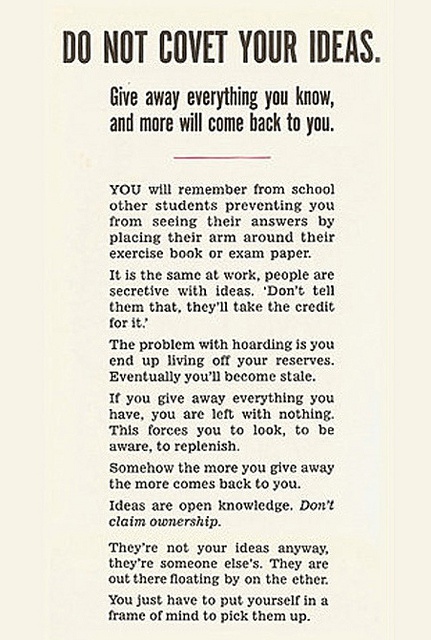 If you covet your ideas you might end up like the woman in that episode of Suits who believed that she would only ever have one unique idea… and if it gets ‘stolen’, then what?

I wonder what would have happened if her idea had not been stolen and successfully used by the established author.

That author turned her idea into a bestseller, which fed her illusion that she was an unrecognised genius, once possessor of a brilliant and unique idea. And since she worked in a bookstore after quitting her job at the publisher she saw people buying the book every day.

What if her boss had not stolen her idea, what if she had been given the opportunity to turn it into a published book, and what if that book ended up not being a bestseller, what if it went unappreciated by the reading public and critics who anoint authors with critical acclaim?

Some ideas are meant to be shared, because giving life to them is a team effort. The greatest ideas which live on belong to all of us and we each play a part in keeping them alive so that the idea evolves and the inspiration flows.

“The original idea of the web was that it should be a collaborative space where you can communicate through sharing information.” ― Tim Berners-Lee