Dreams are made of this… Who am I to disagree

Sweet dreams are made of this…

The False Mirror by Rene Magritte

I adored Sweet Dreams by Eurythmics when I first heard it back in the day… what day was that?

It’s one of those songs that has become part of the soundtrack of my teenage years. Those years also known as being traumatised by the changes in your body, psychology, emotions, and social life. It’s like everything and everyone is against you and you’re rebelling impulsively as a coping mechanism, lashing out and grabbing whatever floats by to stay above the ocean of life coursing through you and around you.

It’s one of those songs which kept me afloat.

The music of that time often reflected the feeling that came with such a dark storm cloud hanging over us, threatening… always there being threatening.

Every decade, every generation, has its nightmares. Nightmares without an end, or so it seems, where humans will bring about the destruction of themselves and the planet.

Might as well grab hold of a song, crank up the volume until your ears bleed, blot everything else out and sing along loudly.

For a moment you’re free, not free from the chaos, but accepting it and just letting go and going with the flow.

Life is a nightmare, sweet dreams relieve us of the worst of it for a while.

It’s one of those songs which haunts you in the way some dreams haunt you after you wake up, you can’t remember all the lyrics or the tune, all the images and experiences which you had, properly as they were, but it stirred something somewhere deep within which won’t go back to sleep, back down into the unconscious, it wants to be made conscious.

You try to shake it off, but it won’t let go.

As you go about your waking life, the dream follows. Just as the tune replays in your mind without needing to hear the actual tune, the deep melodic voice of Annie Lennox sings, and Dave Stewart’s pop symphony moans inside. That beat… synchronising with the beat of something physical, heart, blood, gut… primal. So the dream replays breaking into your thoughts with surreal reality, disturbing your routine, your automatic rhythm with a rhythm of its own.

Go away, leave me be, sleep and waking life cannot merge like this, I don’t know what is real or unreal anymore, and I can’t do this… I need a definite boundary between the two.

But it just won’t shut up, the soundtrack of your mind keeps playing, there is no ‘off’ switch.

What does this dream want from you? To drive you crazy? What does it mean? It seems like a collage of random nonsense. Is there some message trying to cross the barrier between conscious and subconscious? Why does it have to be in cryptic code, why can’t it just be straightforward?

Nothing is ever as clear as that, not where the human psyche is concerned.

Everybody’s looking for something

Sure we all have similar themes in our dreams, and in our lives. But those themes become unique when they move through us and we express them. Even if you have a twin, they’re not you and you aren’t them.

If you dream of snakes, Sigmund Freud might tell you that you have a sexy mind, but Freud had a sexy mind so of course he saw sexiness in the minds of others.

Everybody’s looking for something

But what if you dream of snakes because you work at the reptile house in a zoo.

I used to dream of shoes all the time when I worked in a shoe shop. In one dream I was lost in a maze of giant shoe boxes which eventually toppled onto me, crushing me to death. I quit that job after that. The job wasn’t the problem, the dreams were… yet the dreams showed me the job was a problem. I had taken that job as a way to solve and avoid solving a bigger problem which I then didn’t solve because the job distracted me from doing it.

Who am I to disagree

…with what my dreams are telling me. I am a habitual disagreer. But my dreams have a way of debating with me which is hard to counter. I am a very vivid dreamer, so much so that there have been times in my life when my dreams have been more real than my waking life.

My deviantart is named after a dream – A Party at MoonVooDoo. And some of the random creations I post on there are fragments of dreams turned into something slightly more real – Dreams of my Inner Ocean.

They seem to influence my choices.

I met the love of my life in a way which was uncannily like a dream I had had several years earlier. The dream – The Ideal Lover. The reality – I Remember: Falling in Love. I left out some of the uncanny stuff when I told the real story, but I haven’t forgotten those details.

They occasionally save my life… repeatedly.

Graven – A Hypnagogic Nightmare. This particular dream when I retold it once, helped to get someone I should not have been friends with out of my life. They believed that I had been genuinely possessed by a demon and I became someone they wanted to avoid in case I infected their goodness with my obvious badness. They’d called me an angel up until I told them about this dream. They were not a good influence and I was being naive about it. My dream sorted it out for me.

Who am I to disagree

I don’t tend to categorise my dreams as sweet dreams or nightmares. Some of my nightmares have had sweet results, wherein I have faced fears which I might never have done in waking life. I’m braver in my dreams because I’m not afraid of dying or anything like that. Life’s challenges lose their grip on me and I have a greater grip on them. 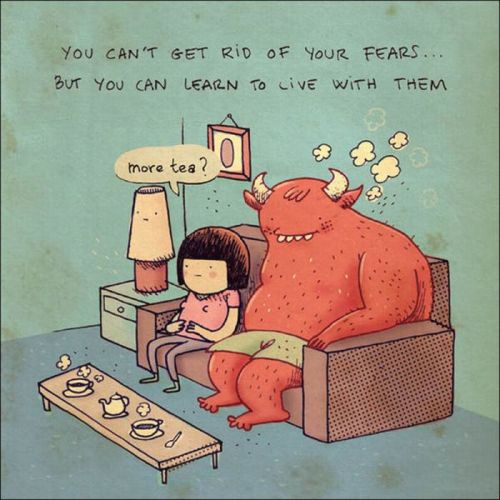 Stuff No One Told Me by Alec Noriega

The other night I had an intruder dream. You know the ones where someone invades your home. The intruders in my dreams generally tend to be female.

Someone rang the doorbell. As soon as the door was opened a very professional looking woman strode into the house and made her way deep into it until she found a chair as far from the door as possible. She sat down and began to talk. She was a saleswoman intent on selling her product.

Her tactic was to force her way brazenly into a home and settle herself in relying on the homeowners’ tendency to treat all those under their roof as guests whether they were welcome or not, and whose fear to seem impolite to a guest would cause them to perhaps buy whatever the guest was selling just to get rid of them politely. She had been very successful with this tactic, her smug confidence was apparent, a little too apparent.

Without hesitation I walked up to her, grabbed her by the arms, lifted her up out of the chair and dragged her back to the front door. All without saying a word. She protested, and each protestation fueled my strength and resolve. I placed her firmly outside and then told her that I was not interested in whatever she was selling, that I never would be, and that even if my life depended on it I would not buy it from her. She had disrespected my boundaries, had invaded my home, and had done so very deliberately. She had not been invited in and never would be thanks to her behaviour.

She started to tell me how wrong I was, how awful my behaviour was, and…

I slammed the door in her face and got on with my life.

I knew she was still outside, still wanting to argue with me, convince me against my will that she was right and I was wrong, she wanted to sell her product and prove to herself how powerful she was, but the closed door was not listening, and her need for a win had caused her a loss, and the more she tried to win, the more she lost.

That was a satisfying dream. Often with intruder dreams, no matter how much I beat them up – and I tend to let loose and unleash hell because I can do so in dreams – they’re still there intruding and being a nuisance. This time… seems I’ve progressed with this theme.

Sweet dreams are made of this.

Sometimes I write blog posts in my dreams, and log in and post them… I never remember those posts. I wonder what they were about.