That is not a Cherry

A room which served as my mother’s walk-in closet and store room before I arrived on the scene and which still retained all of her belongings after my birth, me being one of those many belongings which she collected and had to find a place in which to put them should she ever need them.

…was a typical 70’s wallpaper pattern of psychedelic stripes.

Breaking the flow of the stripes intermittently, arranged seemingly randomly, hung some of my father’s paintings from his early period.

That period was a time when he was a struggling artist who could not afford the materials of his craft. He improvised, economised, did without what he didn’t have and made what he did have work for him.

He dreamed of and spurred himself on with what one day he might be able to create if he had access to all of the paints, canvases and other tools which were out of his reach yet could be attainable if he pursued them with determined focus.

The paintings were small. Little windows into other worlds. Worlds which his eyes had seen, his imagination had translated and his hands had rendered into simple lines, abstract shapes, with a limited palette of colours.

I couldn’t tell what most of them depicted, even if I squinted my eyes and turned my head at an angle, but my eyes and mind tried to make sense of them, give them a form which was familiar to me, as I lay on my child’s bed in the half-light filtering through the shuttered windows of the room.

There was one particular image which I called – The Dead Pigeon. It was of a seascape, or at least I thought it was, with as its focal point what appeared to me to be a pile of bird bones, speckled with blood. I don’t know why I decided that the dead bird was a pigeon. That’s not a bird associated with the seaside, and I was aware of that even then. Perhaps it was the shades of grey. Perhaps it was that I loved pigeons.

Adults don’t always like pigeons, and often consider them to be vermin, creatures who carry disease and poo on everything like critical killjoys. However most children tend to love pigeons… and poo… they see the fascination and beauty in many things which the adult eye and mind finds repulsive.

Children can be morbid. Morbid is the sort of word an adult would use, perhaps to describe a child who is revelling in something which the adult finds… morbid. Who exactly is the one being morbid?

There is much about nature, human nature and the natural world, which a child understands better than an adult because they see it with an accepting eye, curious to know, absorb, and learn, yet allowing it to be free and fluid. Perhaps what is seen will change, evolve, grow, reveal more facets of itself.

The child is open and expansive… the adult narrows and restricts.

Moving from viewing life as a child to seeing it as an adult is a rite of passage, but a passage to into what and where?

A child does not view death and dead things the way that an adult does, perhaps it is because they do not fear being mortal. Life is an adventure, an experience, an experiment, to be lived here and now. Not something to be viewed with eyes looking backwards filled with regret and nostalgia and eyes looking forward with dread and trepidation.

A child’s perspective sees the past and the future as being in the same place as the present. Yesterdays and tomorrows are a part of today.

I was later told by an adult, talking as they do to a child they see as being… those things which adults think of children and their mental capabilities, that my painting of a dead pigeon was actually of an old boat, beached and decaying. It was a dead boat. It’s skeleton bleached by the sun, its vibrant paint almost completely chipped away by the elements. The flecks of blood were not the blood of veins in a living being but the last scraps of pigment, paint, the blood of an artist.

Yet, even though my eyes had been opened, examined, found to be defective and in need of glasses with lenses prescribed by an adult so that I could see what was actually there rather than what was not… to me the image was still of a dead pigeon. My dead pigeon in its little window into its world by the sea. A world into which it had welcomed me when I did not want to be where I was, whose sounds of surf and sand had muffled noises which I did not want to hear, and which had kept me company in the lonely dark hours while I waited for the other shoe on the ceiling to lose its adhesiveness and drop with a thud, squashing the joy of childhood. 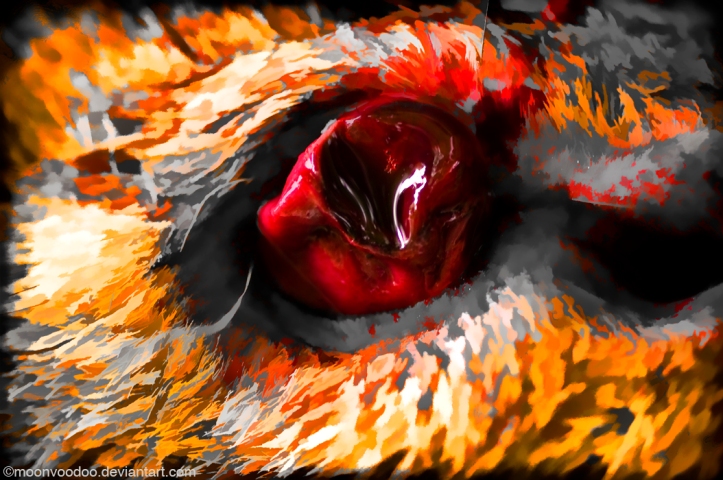 That is not a cherry.

Maybe you knew that.

Maybe you never saw it as a cherry.

A succulent, ripe and delicious cherry, the kind which makes you long to eat it…

…but I have to remind myself that it is not a cherry because I am an adult now.

*for The Daily Post’s Photo Challenge: Work of Art