While browsing Pinterest for inspiration, I came across an image professing to be a list of the weaknesses of my MBTI (see below). I was about to move on without bothering to read it when I noticed the words which the Pinner had added to their Pin.

Hmmm. Is it really? – longer than rather than not nice – screw the nice bit, if you’re really an INTP then that doesn’t matter as it is a matter of perception and personal sensitivity rather than fact, and ‘nice’ is one of the most ambiguous words in the dictionary – I thought, and in typical INTP style I had to check this out for myself.

Now I had a reason to read the list of what was wrong with my type. The ‘P’ in my MBTI had been stimulated, as had the ‘T’. Someone had perceived a problem, and now it needed to be investigated and thought through. A knot needed unraveling by me and my knot-unraveling skills… which occasionally make the knot completely unravelable and a sharp sword is needed to cut the damn thing a la Alexander the Great dealing with the Gordian Knot. 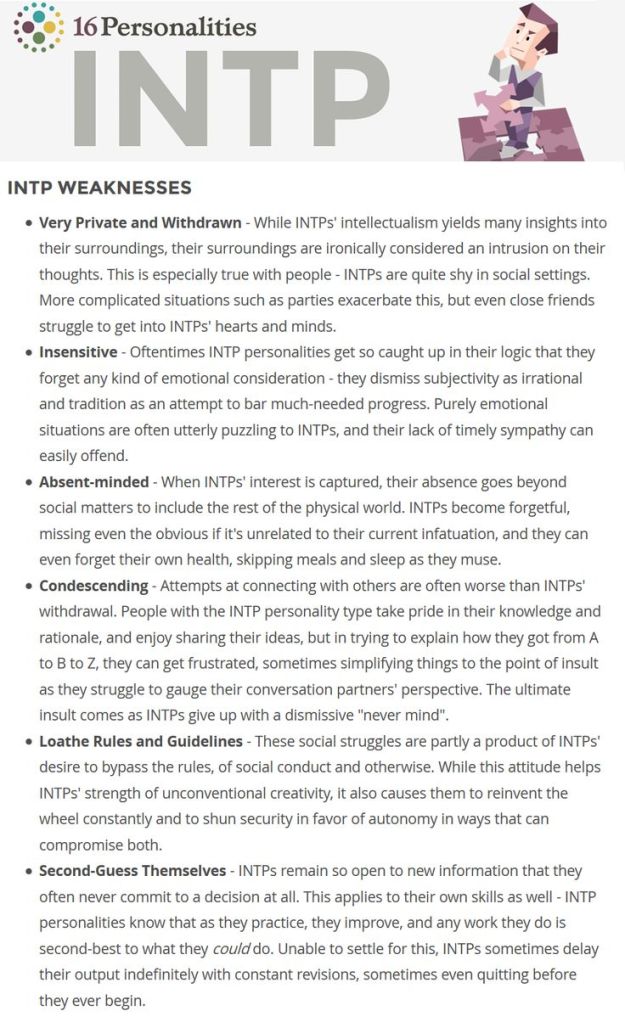 I’m not sure if this particular need to check, double-check, triple-check, until I’m sure (or less unsure) is an INTP trait, or a dyslexia coping mechanism, or a Virgo rising way of dealing with all the absent-minded bumbling and bungling professor aspects in my astrology chart, or a resulting symptom of growing up with narcissists who always present fiction as fact, or a trait of a personality disorder… or it’s just me, the way I am… or whatever.

It’s just something I do. Have taught myself to do, because if I don’t do it I’ll jump to a conclusion which will probably be wrong and then I have to unravel that knot. I like unraveling knots… but not always, not the ones I make while trying to unravel other knots… that’s just annoying and counter-productive (most of the time).

As far as I could see and be sure of, there were the same amount of strengths listed as there were weaknesses. Perhaps the weaknesses had more words than the strengths (I didn’t bother to count them), but that is what humans do when delivering bad news as the messenger is always trying to avoid being shot. So they add honey (extra words) or some other sugary substance to the medicine of criticism.

I really couldn’t see a difference between the strengths and the weaknesses. To me they were and are one and the same because our strengths usually come out of our weaknesses and our weaknesses often come from our strengths. They work together like black and white, contrasting each other, with lots of grey areas where they overlap.

The person who added that comment to their Pin… are they really an INTP? They think they are, but…

I was tempted to butt in with my but, but…

A friend of mine (whom is now no longer a friend, what a surprise!) used to tell me regularly (almost as though they were trying to brainwash me… or themselves… or both of us) that they were an Empath. Not just any old Empath, as in an empathetic person, but a supreme one with awesome psychic powers of empathy. I accepted this, took them at face value – their evaluation of their face, person, personality, persona… until further investigation of stated ‘fact’ was conducted.

I didn’t actually investigate the matter, I just let time do it for me. That time which happens as you get to know someone better… occasionally better than they know themselves because you’ve focused on doing that and they haven’t, or because you have the detachment to do so and they don’t, won’t or can’t – their whole reality may crumble if they do.

If you’re thinking ‘narcissist’ at this point with regards to my friend (or maybe with regards to me?)… that’s what I ended up concluding (about them… judgment still pending where I am concerned and I may be a hung jury on that forever).

This friend not only classified themselves as an Empath, but they also happened to be the rarest MBTI, an Indigo child, and the latest and newest trendy classification at the time of HSP (highly sensitive person).

This meant a lot to them… they’d finally found themselves, figured themselves out. Typed, categorised, and classified themselves into a box and pigeonhole. What it meant for me was ‘walk on unusually delicate eggshells’ when in their company.

So don’t breathe, think, or feel around them or they might get hurt and then… you’d never hear the end of it. Your thoughts, feelings, and breathing was hurting them.

…which I solved by removing my toxic presence from their life.

The other day while writing a post, I noticed that the words flowed freely as though moving along an unknotted line. The thoughts were clear, easy to write and (I think) easy to read… until they hit a knot. A place where I had a problem, an issue, something which caused me to stop and navigate a more twisty, labyrinthian maze of thought and feeling. The words became more complex – so much to say but the words where all jumbled up, intertwined, and confused… I’d hit a knot in my mind.

I’ve probably noticed this before, it’s probably been noticed before by many before me, many who may have tried to elucidate me, but… some things take time to emerge into conscious awareness and then be acknowledged.

“When you’re at the end of your rope, tie a knot and hold on.”