One of the signs which apparently gives a narcissist away is a fragmented personal history.

When they tell you about their life previous to meeting you;

You’ll get highlights which put them in a good light.

You’ll get the typical – all my exes were psychos. 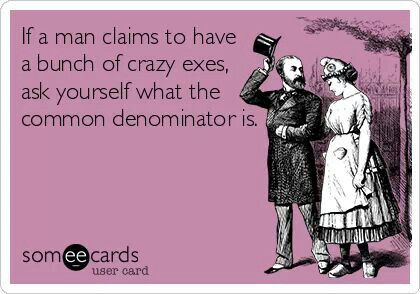 You’ll get dramatic scenarios (and may wonder how one person has managed to have so much drama in one life – and not learn a thing from it but keep repeating it as though they actually enjoy what they claim gives them so much pain).

You’ll get a very intriguing series of tales which when taken separately might seem believable but the longer you know the narcissist the more chances you have to put all the stories together and they never add up. Time frames overlap and contradict each other. Sometimes they were in two different places miles apart on the same day doing completely different things.

They live more than just a double life, they have multiple lives. One event is related in so many ways that there is no consistency or substance to hold on to, just when you think you have grasped who they are and the life they have lived, it evaporates and becomes something else.

If you point out to a narcissist that you have caught them out in a lie, that you checked their facts and found them to be fiction, they’ll either accuse you of being a pedant, negative, insensitive, a narcissist yourself, and any other unpleasant epithets which they have stockpiled in their minds for those times when they are challenged, or they have a viable explanation why they are right and you are wrong, the sort of explanation which will have you believing their version of events and not yours.

Narcissists rely heavily upon you making excuses for them. You misunderstood, you misheard, you should doubt yourself and not them, etc.

This criteria of fragmented history for spotting a narcissist is quite good, however we all have fragmented histories. The history of the human race is full of blank spaces. The further back in time you travel, the more of less there is. Some of these lacunae are purposeful, deliberately omitted parts from the annals of history because the ‘victors’ wrote the story and the losing survivors’ side of events never made it to print. Some of these are empty because… we don’t know why, but we can hazard a guess, fill in the blanks with conjecture based on the fragments which we do have, which we find and believe are reliable.

We pass stories down from generation to generation until they become the truth of what happened, and the further away we move from the past the less we care if it is true or not, especially if that version of events appeals to us, to our own personal history, the kind upon which we build our identity, our story of who we are. 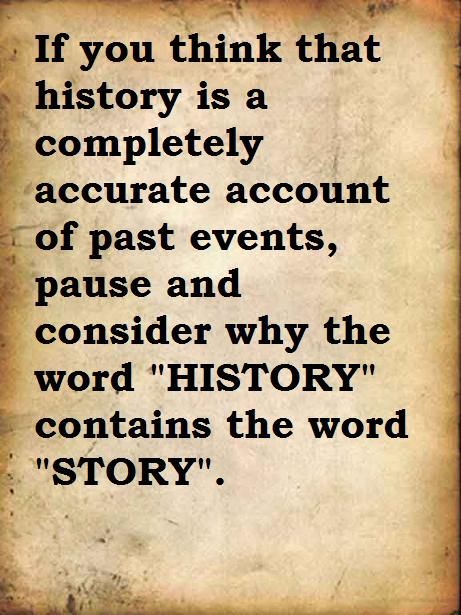 Every now and then a story which we all took for granted was true is debunked, exposed as a lie. At first we may resist the revelation, particularly if it throws our own reality into question, taking everything which gave us stability into a blender, leaving us floating in confusion soup. That truth made our identity true and now that it is a lie… are we a lie too, has our whole life been a lie.

The truth is in theory supposed to set us free… is that a lie too.

Once you accept that everything which seemed so solid can vaporise in an instant, that all which was fact can become fiction, that an irrevocable truth can have its status revoked, then every story ever told becomes the words of an unreliable narrator which we can choose to believe or not depending on whether it is something we want to hear and believe or not. We create our own reality and our own history.

The history of villains often contains tales of innocent parents who heroically love their villainous child in spite of their villainy (because that’s what good parents do), and they don’t have a clue as to why such good people as they are gave birth to and reared such a monster. It must be nature, nothing at all to do with nurture, their child was born evil… nothing to do with genetics either. Their narrative of being good parents may falter if the evil child happens to be an only child, but if there is a sibling who has turned out well, that child is good because of the parents, because of their nurturing, but the evil child is bad because of their nature.

Some children of narcissists manage to sort through the mess of their childhood and beyond. Narcissist parents never let go of their children even if the child manages to get away from them – something which is very hard to do because society judges children who do that regardless of how awful their parents are, somehow the child must put up with it because society needs them to. Society always seems to be on the side of the narcissist, even when its narrative says that it is not.

However even a child of narcissists who manages to become healthy, less messed up, still often has a fragmented history. 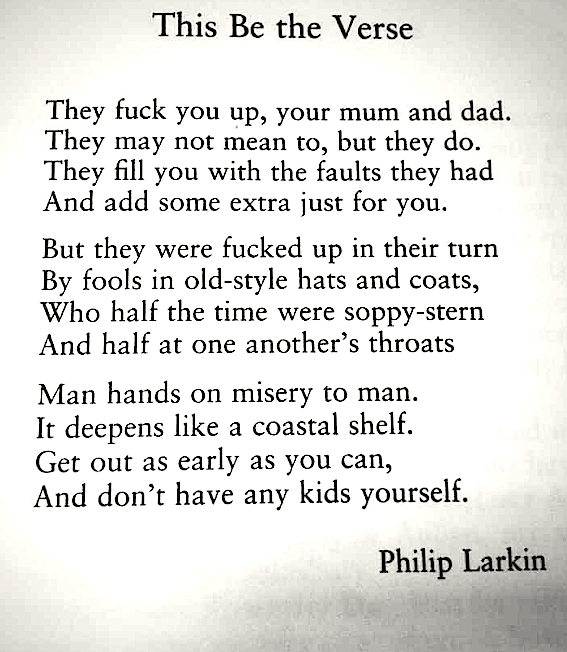 Some of that has to do with just not wanting to remember the hell in their past. A primal survival mechanism which we all have and use from the moment we are born. We get over things, survive, keep going, no matter what… by forgetting. There are some things which are best not remembered.

I have a whole decade which I’ve wiped from my memory banks.

The time frame on many of my stories about my history is all over the place, mostly because piecing things together for a child of narcissists requires figuring out which version of events is the real one. All events which include a narcissist in them (and even ones which don’t but which they adopt as their own for their own reasons) have multiple versions. If a narcissist recounts an event… there are endless variations of it… but the one being told at the time is the definitive truth in that moment, but may change completely in the next moment.

In some ways growing up with narcissists teaches you to live from moment to moment, which when looked at from an esoteric angle means you always live in the now. Be here now because the world and time anywhere else keeps disappearing and changing. The edge of the world is always beneath you and you’re permanently falling through space and time, nothing and no one is real, especially not you (you can’t even be a solipsist).

As a child of narcissists, when your narcissist parent is holding court, narrating the story of an event to their audience, even if it is a private audience between you and them, your required role is to be quiet, nod your head, support their story. Your version of events is irrelevant unless it concurs with theirs, and even then you don’t get to say anything other than murmur noises of approval. They are the only narrator allowed in your life, or anyone else’s life who happens to get sucked into their orbit. If you share your story, it will always get dismissed, destroyed, invalidated, in favour of the version of events which your narcissist parents have chosen for you. Arguing with them about such things lands you in a heap of hell, so you learn to simply erase yourself and all that you know. 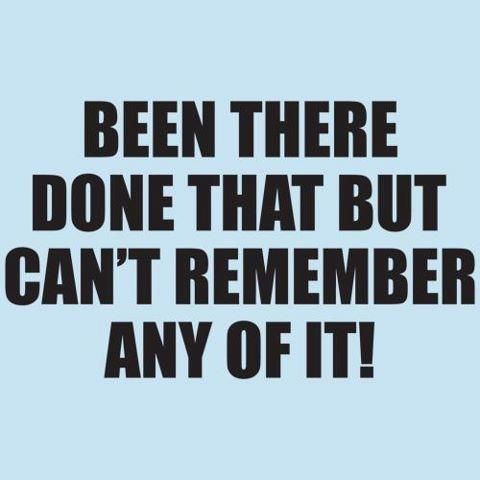 But what your mind recorded never goes away, it’s just buried in the – don’t look here – file.

Some of my history is easier to piece together than other parts. Partly because I held onto my version of what occurred and stored it safely out of reach of the rewriting fingers of my parents. It is also in part due to the fact that my father was largely absent from much of it. He was there but not there. Thus his version of events in which he was not directly involved can be more easily put aside, however hard he tried to rewrite those events, and all I have too do is sort through my mother’s multiple versions of events… and my version of events.

However narcissists tend to involve other people to back their versions up. Some of those other people can be very aggressive and interfering – the sort of loyalty a narcissist can inspire in people is astounding, you’d think this was their life which was under review and at stake when actually they have nothing to do with it personally, don’t have to suffer the consequences of it, and other than listening to a narcissist’s story, buying into it and then going around selling it to anyone who will listen, especially those who disagree, they can detach from it and return to their lives whenever they choose. Vicarious drama is enticing…

When my history involved both of my parents, then figuring things out is nigh on impossible. My narcissist parents were constantly at war with each other, this was their passion play fetish, with me in the middle just like a little piggy (but which little piggy am I this time). They both had allies who fought loyally for them. With me in on the wrong side at the wrong time, except for the occasional moment when I briefly managed to not be wrong… which was eventually wrong later.

If you piece together the parts of my story which I have shared, you may find it to be fragmented. I view it as such. Therefore you may conclude that I am an unreliable narrator, and possibly a narcissist.

If you are one of those who subscribe to the genetic transference of NPD, that those with NPD are born evil therefore their offspring must be evil too, then you’ll come to a similar conclusion. But that requires that you believe my claim that my parents are narcissists. Which means you’re willing to believe some of what I say, yet not all of it. You’re cherry picking… something we all do with history. With his story and her story, and our own story.

History… Memories are made of this. The fabric of memories and history is a quilt crafted of fragments, some are ours, some are those which others have given to us, some of those others who are close to us, and some are far away, figments and fragments of narrative passed down since time immemorial. In memoriam. 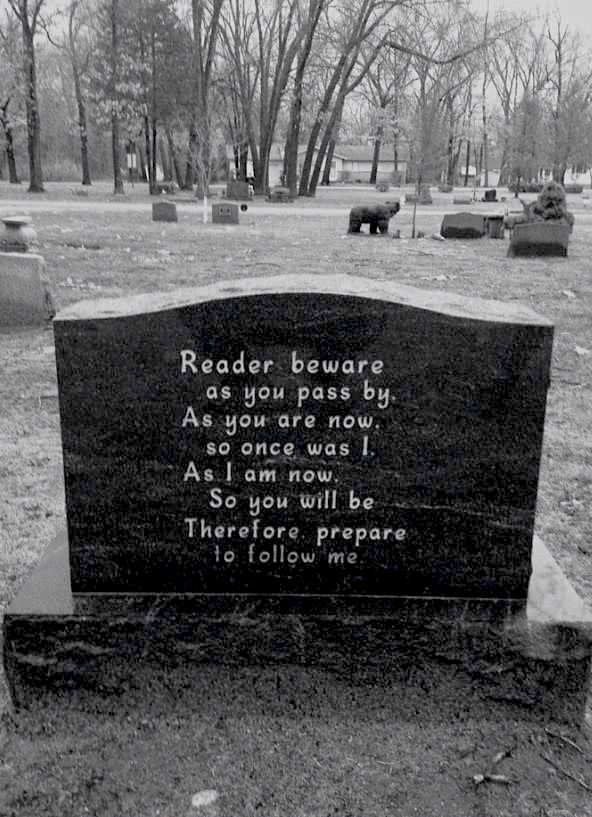