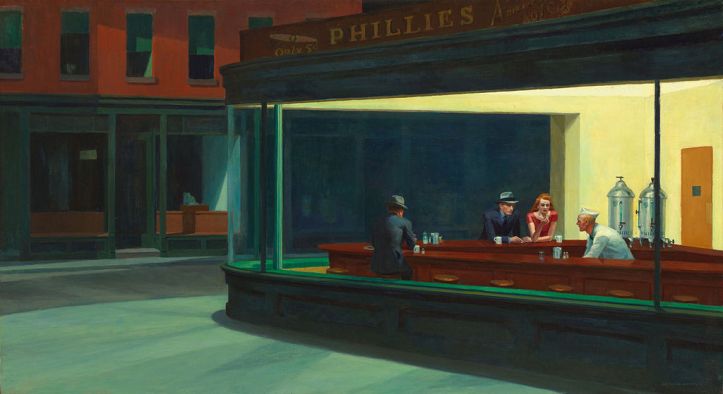 “The only real influence I’ve ever had was myself. ” – Edward Hopper

He stood outside, an observer unobserved.

This moment would be frozen in time and he would be the one to freeze it.

He had done this before and he would do it again.

He would always be the only one to escape because he was an unobserved observer who captured what he observed for others to see, although that was not why he did it… or was it?

“My aim in painting has always been the most exact transcription possible of my most intimate impression of nature. ” – Edward Hopper

Others would take his place, stand where he stood, see what he saw…

No. They would never be able to see what he saw, for to do that they would need to know that his eyes were here, and the instant that their feet stepped into his place, their eyes would replace his and they would see what they saw. Perhaps they’d think that they saw what he saw, because they see themselves that way, as being able to see what others see, but they are still seeing what they see just dressing it up differently in their mind’s eye.

“After all, we are not French and never can be, and any attempt to be so is to deny our inheritance and to try to impose upon ourselves a character that can be nothing but a veneer upon the surface. ” – Edward Hopper

Is that what they were doing (They = the figures in the frozen moment who were but extras in a bigger picture, a fraction of the whole, a quarter of four), discussing their inability to be French no matter how hard they wanted to be. Marking the time by wasting it on regrets of who they could have been if they were not who they were. A dream intruding upon waking life. Elusive. Yet palpably there. A frustration which no balm seems to ease. Unable to make the dream a reality. Chasing the dream becomes the reality. A dreamed of reality which will never be undisturbed by the dream becoming a reality to prove that such a thing was not worth making real.

And why do they insist on distracting the viewer from what the unobserved observer was really looking at?

Because they are human and they always think that they are the centre of attention, that they are the hero or heroine of the story, that the story belongs to them, even when they obviously have only been given a small supporting role as props in someone else’s story.

“I find in working always the disturbing intrusion of elements not a part of my most interested vision, and the inevitable obliteration and replacement of this vision by the work itself as it proceeds. ” – Edward Hopper

They are important, but not in the way that they want to be, as they see themselves as being, for this seen scene belongs to the unobserved observer and not to them. Perhaps they know they are just figments of another’s imagination, characters in another’s tale, but they don’t want to admit it to themselves which is why the shadows are creeping in on them. The only one who seems to know that his is a role of being there but not there is the ‘Very good looking blond boy in white (coat, cap) inside counter’ as he is suffused in light. His job is to serve a purpose for others without others necessarily being aware of the purpose which he serves – the invisible hand which gives others what they need. Take him out of the picture and where would those others be without him? Would they disappear little by little as their needs went unmet… unable to meet their own needs without someone else, an invisible hand, to do what they don’t know how to do as they’ve never had to do it for themselves?

His role is pivotal… yet we aren’t always aware that it is until the axis is gone, the gravitational pull vanishes, and by then it is too late.

If they all disappeared, there would still be light and dark, contrasting, intertwining, making what is flat seem to have dimension. The lure of the light only exists because of the dark. And that lure is what brought the unobserved observer to this spot, outside looking in, which made his eyes look… and freeze this moment in time, a time gone by yet forever there.

“Maybe I am not very human – what I wanted to do was to paint sunlight on the side of a house. ” – Edward Hopper

It is the muse… the muse whose invisible hand serves him with what he seeks and needs. She inspires…

He is gone, but she is still there.

We too will be gone, but she will be there for those who step into our place, whose eyes replace ours…

“If the picture needs varnishing later, I allow a restorer to do that, if there’s any restoring necessary. ” – Edward Hopper

…varnishing the picture with their own veneer.

*Quotes by Edward and Jo Hopper via edwardhopper.net.