The Season of the SeaGoat

Whether you are on the Summer side of the planet or the Winter side or stuck in the middle jumping back and forth over an invisible-ish line between Summer and Winter, or straddling the line with one foot frozen in the snow and the other getting burned on a hot beach… it’s Capricorn season and I hope you have a great one!

Tropic of Capricorn in Namibia by Philomène Martinelli (love this photo, wtf are they doing!?! Looks like fun!)

It’s a strange time of year for all of us, and it doesn’t matter whether you celebrate anything or not, are in a festive spirit or not, because when one year ends and another begins there are certain shenanigans afoot. The simplest of which is trying to remember to change the number at the end of the year.

So, what does this time of year mean for you?

Before you can answer I’m going to keep talking… this is the anti-silent treatment (maybe next time you consider complaining about a Capricorn giving you the silent treatment, you’ll remember what it is like when they aren’t silent and will accrue a new appreciation of when they are). I am aware how much other signs dislike it when Capricorns go silent, perhaps because you know what goes on within that silence – we’re replaying everything you’ve said to us and comparing it with your actions, absorbing things, the relationship, at a deeper level. If you’re the self-conscious or paranoid sort, you’ll hate this silent night which can go on for days depending on how much talking you’ve done versus acting on your talk. 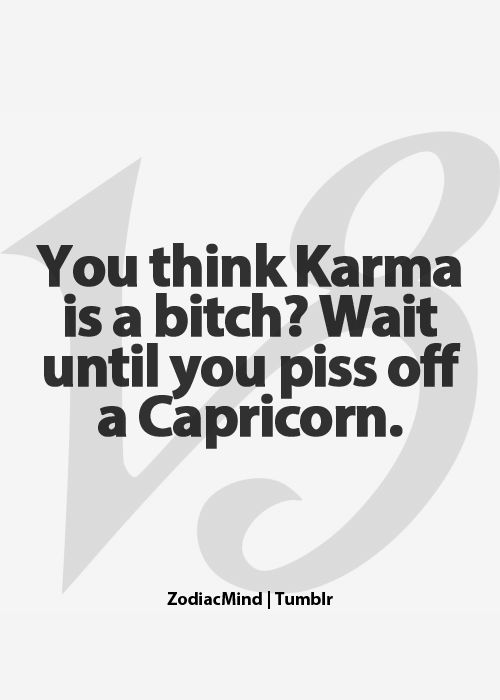 Is your relationship with a Capricorn due to Karma… perhaps paying you back for something you did to someone else (maybe in a past life ’cause in this one you’re an angel to everyone)  who asked Karma to do them a solid?

If you’re into astrology at all…

Capricorn is the Zodiac sign voted (by other signs) most likely to be a sociopath, and probably to succeed while doing it. It’s the be-suited briefcase carrying man or woman who lives in a minimalistic bunker, always prepared for the end of days with a way to make money from it and spend its final hours swimming in gold like Uncle Scrooge. The one who builds an empire out of the tin cans discarded by others. It is also most likely to live on a strict diet of worms, glass shards, rubbish and other things which make the other signs go Ewwww!.

I found the below image on a Capricorn’s blog, which made me chuckle with delight (Cappies can do that all the time although others will only see a deadpan expression when Cappies are laughing it up and they’re not likely to share the joke… or if they do you’ll miss it and think they’re being serious).

image via Capricorn Love by Oh Me, Oh Meagan

The only thing about the image which bugged me was the ‘cheap vodka’. Capricorns tend to save their pennies to buy the most expensive vodka they can find and know how to appreciate the finer things in life after arduously slogging to earn them. However sometimes the finest things in life are the cheapest or even free. We do love free stuff when it is genuinely free as opposed to pretending to be that way like a trap with so many strings attached that you end up looking like an overly manipulated puppet tied up in someone else’s knots if you take the bait.

One of the things which often annoys other signs about Capricorns is their (no nonsense) attitude.

The ‘emotional’ signs will wail and cry and bemoan a Cappie’s ‘unemotional’ reaction to their emotions, however if a Cappy shares their emotions, then those same signs feel ‘overwhelmed’ and can’t handle anyone else (especially not someone they rely on to be cold and distant) being emotional in their general direction or anywhere near them.

Fair enough. Capricorns tend to keep their emotional whine bottled up for centuries (to increase its value) so when they do decant it (it tastes like noxious vinegar)…

Hopkins is a Capricorn… no idea what sign Lecter is.

The ‘attention seeking’ signs will throw a diva tantrum about a Cappy not giving them the attention they deserve and want and will shout and stamp their feet about not getting what they want right here and now when they want it. The problem is if Cappy gives you what you want every time you want it (which is all of the time), it is still never enough and you want more. Capricorn is a sign which is associated with time and the use of it. Each grain of sand which slips away is our life slipping away with it, each tick of a clock is a heart beat they will never get back. While they’re giving you attention, their life is expiring and you will still not feel they’ve given you what you wanted from them even if they die for you (how selfish of Capricorn!).

The earthy signs… usually like us. That’s weird, isn’t it, for someone else to actually like a Capricorn.

The other day I watched – This is The End – and after having an awesome chuckle, I checked out the signs of the actors involved in the movie, as many of them regularly work together and seem to enjoy each others’ company. The dominant signs in this combo were Aries and Capricorn – two signs which are astrologically not really supposed to get along, but they do perhaps… just to annoy astrologers and rub their interpretations’ wrongness in their faces (something both signs quite enjoy doing as a hobby). Of course in This is The End, the Capricorns all ended up (badly) serving the devil in some way (our sign is connected with The Devil in Tarot)… whereas the Aries sort of bargained their way into Heaven (except for James Franco who messed things up… oops, double oops if you haven’t seen the film, this minion of the Devil just spoiled it for you… it was a very funny moment and I felt for him as though I was him effing things up for one last laugh – those last laughs are most delicious and hard to resist). 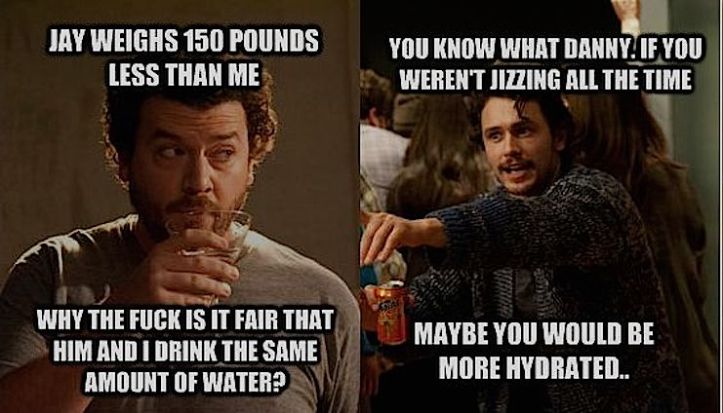 If you like astrology and happen to follow blogs on the subject… this is often the season when astrologers take a break from regular posting. They’ll be back when Aquarius is in season. Sorry, Capricorns your season is one where we ignore you because we’re paying attention to ourselves and our need to take a break from stuff like life and et cetera. You’re boring, anyway, so whatev’s.

Even when an astrologer does pay attention to Capricorn at this time of year with a Panto look at astrology….

“Capricorn – responsible, ambitious, serious. As with Taurus, I don’t see Capricorn as taking the lead in a fairy tale or pantomime, the sign’s characteristics better fit supporting roles such as merchant (as in father of Belle in Beauty & the Beast), or a landowner, aristocrat, employer etc.” via The Zodiac’s Fairytale/Pantomime Characters – Learning Curve on the Ecliptic

We get to be the grey figure in the background who is (never the lead… really, that stings for a Cappy!!! We love to be in charge why aren’t we!?!)… well, in this case, Capricorn is a sentimental, cowardly jerk who happens to be a business man who really sucks at business when you think of the deal he made. Thanks for that!

I do love this blog though, it gives a very intriguing take on the subject.

If I were to choose a Panto character to represent the sign of Capricorn… out of those used in the post I’d say that Cinderella makes a better Cappy than she does a Cancerian. All the Cancers I have known go all Meryl Streep (a Cancerian) when they suffer and there is no way you don’t know about it. It’s always Oscar worthy.  Cinderella just put up with stuff really quietly and got on with it without a peep.

Beauty is quite Saturnian too in her approach to things, after all she accepted the crap deal her father made and then she made the best of it and it turned out rather well for her. Frankly her dad sounds more like a Cancerian or Leo, as those are the signs of my parents and that is the way they would have used me to further themselves and save their precious asses by sacrificing mine. Only my sacrificed ass would learn how to save itself. So there!

Capricorns treat the trait of grumpiness as though it was an art form. You would too if your symbolic representation was put together by Ripley’s Believe it or Not. A half-goat, half-fish… really!?! That is so impractical on so many levels! How are we supposed to climb mountains with the tail of a fish being dragged behind or swim with hooves? Whoever created that was having a laugh at our expense!

And the glyph… have you looked at it? It’s a VS as in versus… so, of course, we’re always going to court controversy and annoy everyone who isn’t us. No wonder other signs don’t like us, we’re always arguing with them, playing Devil’s Advocate. We have to… no one else wants to do it with the determination that we put into it.

If you have a Capricorn in your life (or read the blog of one… like this one) you may want to practice knowing when I’m being serious and when I’m being silly but doing it in a deadpan way. I sometimes can’t tell the difference myself… how mysterious…? Maybe, probably not… frankly I find myself irritating (and other Caps sometimes annoy the mincemeat out of me – which is usually how I know they’re a Cap before I check their Sun sign). It’s a special kind of irritating, a bit like itching powder surreptitiously placed in your most serious outfit.

Anyway… tum te tum… Happy Cappy Season… and if the Grinch gets you, tickle his belly, he hates that and loves it at the same time!

Foo Fighters – The Pretender (David Grohl is a Capricorn)