Between the Devil and the Deep Blue Sea

The other day while I was working on the image which I created for The Anahata chakra, which covers the area known as heart, my mind wandered, as it always does, through the symbolic associations connected to such a vital organ, through my own experiences relating to my feeling of heart, through whatever pathways opened up. I flowed along them as blood through veins, as oxygen through the body.

I recalled a dream I once had many self-eons ago, one in which all humans had a crystal implanted in the skin of their chest just above the heart. This crystal changed colours regularly when the human was a child, and later as an adolescent it continued changing although less frequently, until the human reached adulthood, something determined by the crystal itself when it no longer change its colours. The final colour revealed the type of human you were and was used to identify to which group someone belonged, and people were separated accordingly. The most common colours for the crystal were orange-pink-red and green-turquoise-blue.

The dream began in the middle of my own story. I was an adult whose crystal had already fixed upon a colour. I also happened to be a member of the crystal police, whose job it was to monitor the boundary between groups – in other words, make sure people of different crystal colours did not form intimate relationships. They could socialise as much as they wanted but they could not go beyond casual acquaintance. I was in a committed relationship with a fellow crystal police officer, something arranged by the crystal’s other abilities and functions. All was exactly as it should be…

Until one fateful occurrence. I was on patrol one day, doing my usual rounds, when, as I pressed a button to summon a lift, I received a massive electrical shock. I passed out and was woken up by my fellow officer and partner. As he helped me to my feet and I assured him that I was okay… something very not okay happened. Bolts of electricity shot through my veins and burst out of my crystal, my heart felt as though it was exploding like a firework… and looked that way too. My crystal turned very dark, then very pale, then lost all colour as though it had been switched off. Was I dead, I wondered. But before I could finish wondering that, the crystal sparked again and soon it was glowing vividly with vibrant hues… the opposite hues to the colours I used to have. My crystal had changed colours, causing me to now belong to the other group from the one I had belonged to. I was now a different type of human.

There was more to the dream, the saga continued with me and my partner trying to hide the change in my crystal from everyone, especially the authorities, while we tried to figure out how to fix what must be a malfunction, as the ramifications of such an incident and change would have many dramatic consequences for my life, and the lives of people like my partner. I can’t really recall what happened, but whatever was hidden ended up being revealed…

Such is life, not just the territory of dreams. And such is the nature of the symbolic heart.

When I woke up from this dream, the part which stood out in my mind, and the reason I can still recall this dream so many years later, was when my heart was electrified. It was an amazing feeling for the dreaming self rather than the dream character representing my self.

At that time in my life I was in a period which I refer to as – The Grip-tight. My heart felt as though it was encased in an iron fist. The ribcage was a cage, designed to protect and protect it did, but the protection had become a prison. What inspired the dream was inner work which I had been doing to liberate my heart from its prison.

image via That Caged Feeling

It wasn’t really the best time to do it… but is there ever really a best time to do something? In hindsight maybe, and if hindsight could travel back in time and become foresight… well, I probably wouldn’t have done anything at all, ever. Being able to predict things ahead of time may be useful, but it can be as much of a hindrance as it can be a help. At least in my opinion…

During those years I was caught between the devil and the deep blue sea, between the Scylla and Charybdis…

“Scylla and Charybdis were mythical sea monsters noted by Homer; later Greek tradition sited them on opposite sides of the Strait of Messina between Sicily and the Italian mainland. Scylla was rationalized as a rock shoal (described as a six-headed sea monster) on the Italian side of the strait and Charybdis was a whirlpool off the coast of Sicily. They were regarded as a sea hazard located close enough to each other that they posed an inescapable threat to passing sailors; avoiding Charybdis meant passing too close to Scylla and vice versa. According to Homer, Odysseus was forced to choose which monster to confront while passing through the strait; he opted to pass by Scylla and lose only a few sailors, rather than risk the loss of his entire ship in the whirlpool.” – via Wiki

My mother was Scylla and my father was Charybdis. And I was Odysseus trying to navigate the narrow straight between them, endeavouring to figure out which monster was the lesser of two evils.

I had been navigating this patch of water since I was a child. Had crashed my ship on the rocks of Scylla and been sucked into the whirlpool of Charybdis so regularly that… I could predict what lay ahead and really wished that this mythical quest would end, but for some reason I was either unluckily immortal or stuck in some torturous time loop which kept reseting my mortality.

I wanted out… but how badly did I want out?

The problem with these sort of dramas is that they take on the proportions of an heroic quest, with us starring as the beleaguered hero. We become attached to our pain and the monsters causing it. But are they really the cause of our pain. Sure they become the cause and give us a cause, something which our heart loves. The heart loves a challenge, loves being a hero, especially one on a quest to conquer monsters, save damsels in distress, uncover treasures and win rewards which victory promises. It can be a very addictive experience, one which we may never want to end…

– Wrapped Around Your Finger by The Police

…and so if we get an opportunity to get out, we may choose to ignore it, cover the door with a false wall, cover the wall with a curtain and forget where the exit is.

Underneath all the glamour of an heroic quest, lies a dark underbelly… our inner darkness. Our passion for our monsters, without whom we could not be a hero. Conquer your monsters, and then what… who do you become? Whereas if you always have a monster to fight, you will always be a hero on a legendary quest, you may even be lauded and applauded by others for your strength, your courage, your determination. Others will flock to you and request your assistance. You could build an empire out of it.

Castles built out of the corpses of deceased villains, heads of slain monsters adorning the walls of your throne room… but you will always need to find new monsters, which is easy when you’ve become one yourself but still see yourself as a hero.

And who are all these monsters, are they really monsters or just a pile of rocks and a swirling bit of water, which if you didn’t try to navigate that part of the sea wouldn’t mean a thing to you, you wouldn’t even know they were there.

If a six-headed sea monster has no witnesses… what is it? Does it exist or is it just a figment of its own imagination? Maybe it thinks it’s normal, a regular and ordinary creature, but then along comes some guy in a boat who is on an heroic quest (because he doesn’t want to stay at home and peel potatoes, although he does like to talk a lot about how much he misses such simple pleasures because he sounds and looks good when he says it… but does he mean it?). The guy in a boat spots the ordinary creature and decides that it’s a monster (perhaps because the creature acted startled on being disturbed and wasn’t best pleased about the invasion of its territory by a hostile chap on a floaty thing). He must invade this monster’s world and slay it, then return with tales of his great heroism to share with those who don’t go looking for monsters but love hearing about others who do.

Are our monsters, really monsters… and even if they are, what happens when we decide not to navigate the waters where they live and take a different route instead, one where we don’t find monsters, but find lovely people instead?

“A man told me once that all the bad people
Were needed. Maybe not all, but your fingernails
You need; they are really claws, and we know
Claws. The sharks—what about them?
They make other fish swim faster. The hard-faced men
In black coats who chase you for hours
In dreams—that’s the only way to get you
To the shore. Sometimes those hard women
Who abandon you get you to say, “You.”
A lazy part of us is like a tumbleweed.
It doesn’t move on its own. Sometimes it takes
A lot of Depression to get tumbleweeds moving.
Then they blow across three or four States.
This man told me that things work together.
Bad handwriting sometimes leads to new ideas;
And a careless god—who refuses to let people
Eat from the Tree of Knowledge—can lead
To books, and eventually to us. We write
Poems with lies in them, but they help a little.”

Pull back the curtain, remove the false wall, open the door… 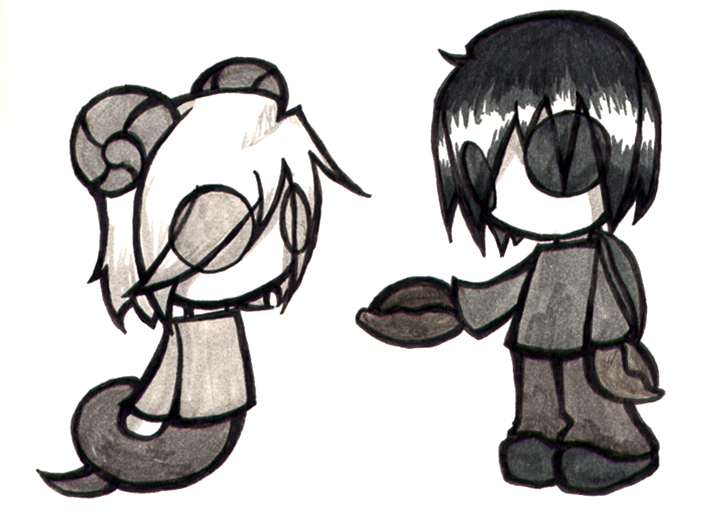 Capricorn and Cancer by AketA

“We’ve gorged ourselves on the results of our own behaviors, ‘served up’ to us by the Universe. This image only emphasizes that what we have in front of us to choose from at this time is directly related to what we have chosen and made ourselves….

….If we are clever, we can make our play part of (even the centerpiece of) our healing, combining our purpose with enjoyment, even within the confines of a place full of suffering and hurt.”

– via Just a Little Lunar Essence: the Sabians for the Full Moon 4 January 2015 by Julie Demboski

Scylla and Charybdis are also asteroids and can be looked up in your astrological natal chart via Astrodienst’s extended chart selection and asteroid list.

The results are intriguing.

The Police – Wrapped Around Your Finger