Hard as Diamonds, Tough as Nails

If you observe life and yourself living it for long enough you begin to notice recurring patterns.

Some of these patterns are attractive designs, they please the eye and when they are active things flow smoothly as if by magic. Others are garish, harsh and hurt the eyes, and when these are active everything seems to go wrong and nothing you do seems to go right.

More often than not the different patterns in life work together – so, for instance, something will go wrong, causing a lot of struggle against a fierce current, just as you’re about to give up and let yourself drown, suddenly the tide will turn and the current will carry you along and plop you onto a beautiful beach, where you will be greeted by a friendly face who offers you a refreshing cocktail and a soft fluffy towel.

That reminds me of a dream I had last night where I became focused on the texture of sand. It was fine and felt like silk to the touch. I forgot all about the fact that I was lost in the middle of the desert dying of thirst, and waxed lyrical about the intense beauty of the tiny particles.

That’s a regular pattern in my life, in me. In the middle of some harrowing experience which feels as though it is crushing the will to live out of me, I’ll find myself focusing on something intensely beautiful and for a while I’ll be in the eye of a storm, serene as chaos rages around me.

This pattern can be found in my astrology chart, as can many of the other patterns of my life. Which is something that I find fascinating – to see something I know so viscerally, personally, reflected and explained by something which… well, how could something outside of me, created by people who do not know me or my life, know anything about what it is like to be me, to be inside of me, to live as I live.

Astrology really does not know anything about you personally, however it is a science which studies patterns, and has been doing so for hundreds of years. Certain patterns are universal, hard-wired into human nature because they are a part of the nature of this planet.

Feel free to argue convincingly against astrology (and anything else that I say) with me if that’s one of your patterns. I should however mention (a waste of breath pattern perhaps) that I have counter patterns to that kind of scenario. These can be found in my chart, particularly if you look at my Sun and the planets aspecting it – Pluto and Saturn. 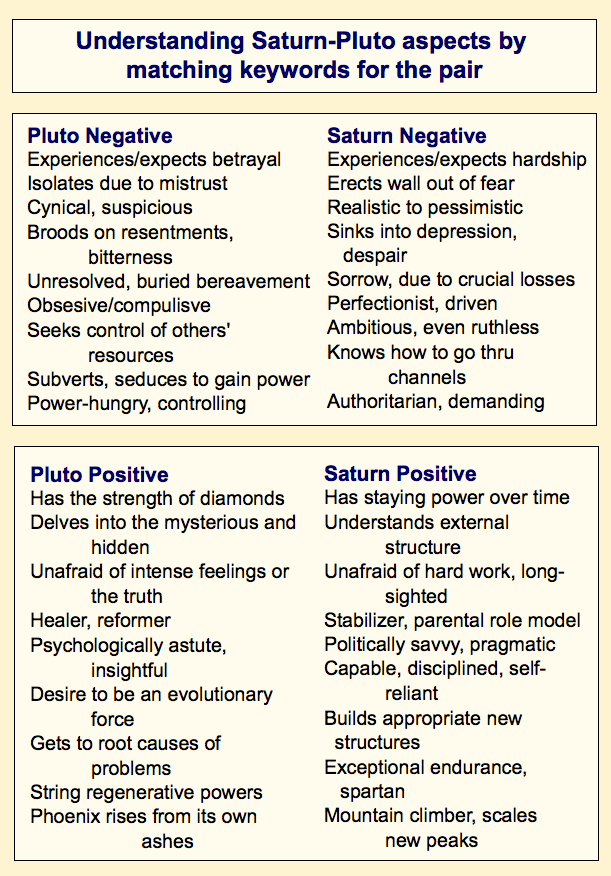 via The Saturn-Pluto Vibe

At the moment Pluto and Saturn are in focus in my chart due to transits of those planets to those planets (and others) in my natal chart. Intense and heavy are the theme of the moment for me, and have always been a life theme for me.

When I was younger this type of energy, and the patterns it creates, instigates, stimulates, sets off, was traumatic and difficult to deal with, not just for me but for others too – but frankly in those days how it affected others was the least of my concerns, as is always the case when you’re caught up in your inner hell and your pain blots out the pain of others. And if the pain and inner hell of others is part of the reason why you’re experiencing your hell and pain… 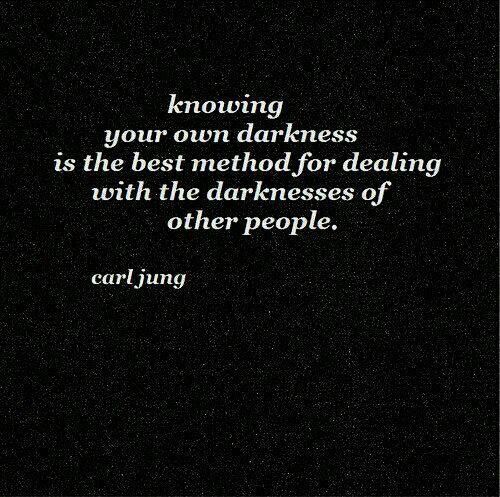 These days a trip into Pluto and Saturn hell is not dissimilar to a weekly foray to the local supermarket. It’s still hellish, but the darkness is a friend now, and I’ve learned to focus on the beautiful contained within the horror, and appreciate the texture and design of garish and harsh patterns. It doesn’t mean I like them, it, but you don’t have to like something to see its value. Sometimes it has more value because it is impossible to like – ‘like’ is overrated.

Which reminds me of something I noticed the other day on my Pinterest timeline. Someone I am following likes beautiful interiors, modern masterpieces of expensive design.

While someone else I am following likes decayed decadence, interiors which were once upon a time modern masterpieces of expensive design, but which have long since been abandoned.

The juxtaposition between their pins as they merged on my timeline struck me as very fitting of the Pluto and Saturn vibe, as Saturn represents structure and Pluto often destroys structure. It destroys to rebuild, and Saturn is very adept at rebuilding when something has been destroyed. But when Saturn rebuilds the process is slow, as it likes to sift through the rubble to decide what to keep and what must be sacrificed, is no longer needed.

For a moment, as I looked at the juxtaposed images, my mind flipped the scenario around and saw the new, expensive, modern design of today as it would look in the future, crumbled, decayed, abandoned.

I’m considering buying a home at the moment. I’ve always been a gypsy where home was concerned (Sagittarius on the 4th house cusp), yet I’ve dreamed of owning my own little kingdom, just never got around to doing it – patterns again. And in exploring this idea of finally settling down, I keep noticing how illusional and delusional the world of property is (as well as questioning my own delusions and illusions about it). 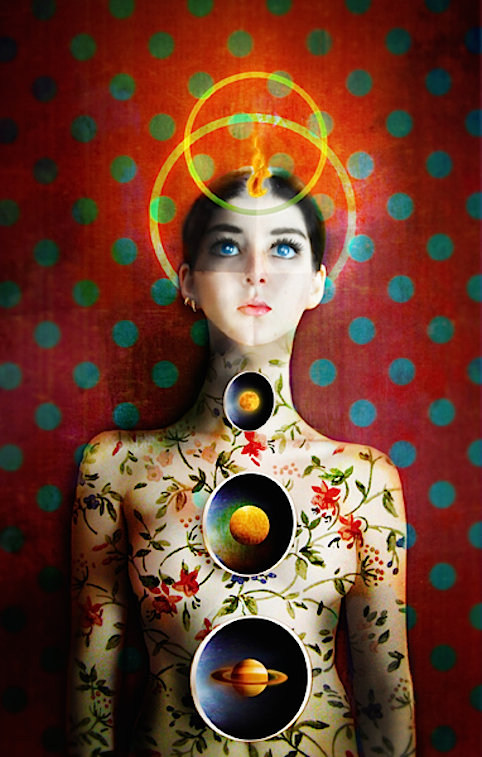 The Cosmic Cabinet by Mariana Palova

Saturn is transiting over my Neptune (and IC). This can be a bubble burster, reality suddenly turning off dreams’ radio causing the dreamer to hear what is actually there, but it is also a good time to create some very solid foundations. Transiting Saturn is also squaring transiting Neptune, which is on my Venus (thus Saturn is squaring that too – bringing the heavy real to love of all kinds). My Moon is also caught up in this, so my emotional realm is uncertain of itself in ways which tie into what Pluto is up to, sitting on my Sun, squaring my natal Saturn – which is being zapped by transiting Uranus.

The world as I know it is falling apart like the Tower in Tarot, in slow motion, in a manner which I can’t help but view as rather beautiful. Each shard glints in the light held within it, there is a sense that in the shattering something is being released.

The hourglass has broken, letting tiny particles of sand loose. Each one sparkling like a tiny hard diamond, tough as nails yet so soft to the touch.

Endings and beginnings all blending together… is a pattern for me, my life – I have Pluto (and Uranus) in the 1st house of being me, Pluto trines my Sun and Saturn squares it, both bear down upon me with intensity and heaviness, honing and destroying to rebuild, again and again…therefore if I were to stop blogging forever, it would just happen, and my last words would not be ones which I knew were last words when I wrote and posted them. They would probably be – see you tomorrow…