It’s All the Rage!

Letting it slide is in many ways my go-to coping mechanism for life, and when dealing with those complex beings known as other people.

It’s one of those ways of approaching life and relationships which grows out of a natural trait rather than something unnatural which you force upon yourself.

If you’re irascible naturally… trying to be Zen is something you have to force upon yourself, and may resent.

If you’re naturally an airhead, trying to be less of one… it’s easier to turn what is natural into something useful, maybe making small adjustments to it as you go along.

If my head wasn’t attached to my body, I’d probably misplace it and not notice I’d done that for several days, maybe even years.

When people criticise me in a non-constructive manner, I often don’t notice until much later that what they were saying was a criticism, and it takes me a little bit longer to realise that it was one designed to hit me where it hurt rather than them just being snarky because they were in a bad mood. By the time I figure that out… the moment has slidden away.

Sometimes that’s a good thing. It sorts out the problem without the problem becoming more than it was – a passing of snark, like a fart. But not always.

Sometimes that problem is a bigger one in the making and letting it slide makes it worse. Especially if the person who criticised you found your lack of interest in and reaction to their criticism to be the match which lit a fuse for the stewing issues inside of them.

You can never be sure which scenario is which…

Sometimes I let things slide because I’m an airhead, and sometimes I do it deliberately. I’ve noticed and have chosen not to notice, because this particular airhead also happens to be irascible and forces themselves to be Zen.

Anyway, I finally got around to doing something which I had let slide in a different version of that concept. Dandejure on deviantArt asked me to pick one of his poems and create an image for it.

I let it stew for a while… and eventually exploded. 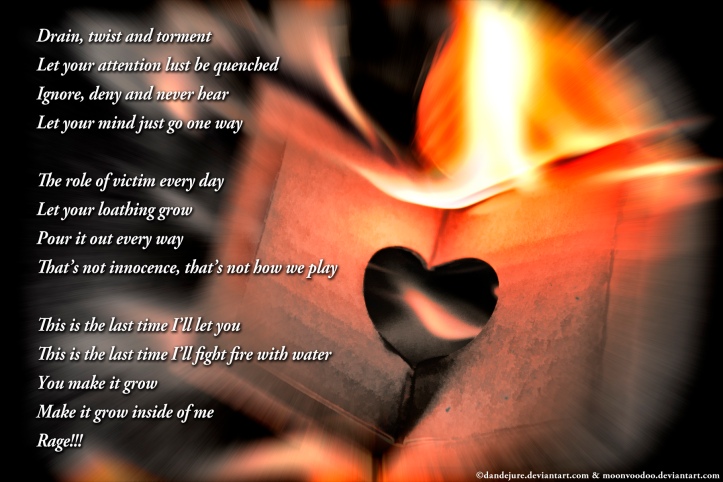 Don’t put a silly hat on a pussycat.