The Benefits and Risks of Turning 40

Thank you very much to the wonderful person who inspired this post, our conversations mean a lot to me… I’m not going to make you take the blogging stage, but if you would like to… it’s up to you.

Happy Birthday to everyone who has a birthday this year,

especially to those turning 40,

Best wishes and many blessings to you!

I turned 40 a few years ago, which makes me an expert on such matters (I’m putting on my expert expression – thank goodness you can’t see it, that shit is scary-stupid and includes a lot of giggling which is unseemly for my age!).

I can’t recall how I felt exactly when I crossed the threshold…from 39 into 40.

I’d like to pretend that I didn’t have all those things we humans get when we pass over into a new decade. I could pretend… but I really don’t like pretending even though I’m rather good at it.

I solemnly swear that if I’m not fine and I tell you I’m fine you will believe me – maybe… basically my games of pretend rely less on my ability to pretend and more on the ability of others to play along with me about whatever I’m pretending to be.

Aging is great when you’re young, you love that stuff and look forward to it because when you’re older you’re going to do all these things, big things, awesome things, make your mark, be someone, something, a contender…

… then you get older, and it’s not all that you thought it would be…

… you’re still young so you look forward to getting to that age when all your dreams will come true, and stuff like that.

But then you get to that age which you’ve decided is a milestone in some way for you, and if you haven’t achieved all those things you had planned for yourself…

… it can get complicated, your relationship with yourself can become rather more difficult than it usually is. This tends to trump all other difficulties in other relationships with others…

If you hated yourself when you were young and hoped aging would solve it miraculously for you… you may end up having your expectations disappointed in such a way by yourself that you may never be able to forgive yourself for it.

We hate it when others betray our ‘trust’, but when we betray our own trust… okay, we may excuse our own shit more than we excuse the shit of others, but there comes a time when we have earned the karma of what happens when we blame others for our own problems with ourselves – it all comes crashing down upon us and our blame games get very up close and personal.

If you had issues… those issues can become more fermented with age. If you drink from a cup filled with that kind of wine or whine… intoxication ensues, and the hangover from it will be the least of your problems.

When I turned 40… I had one of those moments of facing my own mortality which sent me into a tailspin, more than was usual for me.

My late 30’s included some physical ailments which made me confront some emotional and psychological ailments… our physical selves are often influenced by our other layers of self. Facing one part can bring us face to face with other parts. Whatever you’ve been ignoring may refuse to continue to be ignored… and demand your attention in a manner which is unavoidable.

Growing up and old isn’t always what we think it is going to be… neither are we.

I had reached my risk-taking age…

via feel better through tumblr

… that age when you decide that taking risks really isn’t that much of a risk anymore, you’re almost dead anyway (those older than me may see what I just said as the ultimate proof that I’m a 40 year old teenager who thinks they know everything but knows nothing at all), so if taking a risk kills you… meh!

At least you died in a blaze of some sort of glory rather than hiding all your life in that rather barren experience of being cautious, taking precautions, being sensible, providing for your future… blah, safety, blah… and boring yourself to death really slowly.

I had so many cases of the WTF-am-I-doings after I turned 40 that I soon forgot the growing pains of aging and was more concerned about the fact that I seemed to be retrograding into some sort of… living the ages I’d missed when I was actually those ages… and it was such fun that it worried me – are we supposed to enjoy living this much!?!

I middle-fingered my way through it at first…

Frankly… that’s so awesome, screw being grown up about it!

I pretty much embraced the stereotypical midlife crisis thing, and rather than fight it, try to be different, be all adult-adult about it, I went with it and let it take me to places I had never been. A sort of reverse bridge burning… walk through the fire, see where it leads, even if it means tumbling…

Like tumblr… many people think that platform is mainly for teenagers… it was perfect for my regression. And I am grateful to all the teenagers (real and otherwise) who helped me not grow up while growing up.

When I was an actual teenager I behaved as though I was in my 80’s, but felt like I was 100 years old. I minded my P’s and Q’s in such a well-mannered way that I censored anything real about me.

This could be explained astrologically…

If you’re one of those people who is afraid of astrology and can’t accept that others like that kind of thing because… that shit is whatever ‘bad’ you think it is… dangerous to logic and all things sane and normal… and you need everyone else to confirm your views to you for you to feel safe, or whatever, even if you have to force others to do it against their will for the sake of your will…

I’m at that age when I do and say as I please (with as much consideration for others as I can be bothered to muster) because I’ve finally come to some understanding that… we’re never going to agree no matter how bent over backwards I go for you, to please you… you might find my efforts to please you more annoying than when I don’t please you, being displeased may be more pleasing to you than when I’m trying to be pleasing to you… and… shit, that kind of calisthenics is exhausting for all of us…

Eff it! I’m a Capricorn Sun… we’re annoying to everyone, even ourselves and each other…

Which reminds me that I have a comment from a non-Capricorn asking for my expertise on Capri-crones which I haven’t answered yet… who the eff made me an expert on Capricorns… oops! That may have been me while I was left unsupervised…

As a Sun sign Capricorn I was born shriveled up, grumpy, the typical view of ‘being old’, a less spiritual version of the whole old soul concept, and… by some kind of effery of astro-karma this sign seems to lose our wrinkles (in an abstract, surreal way), our grump (okay, we never really lose that but it chills out and finds itself funny – expressed in deadpan style), and get with the whole being ‘young’ thing bit by bit as we get older.

We’re the frigging Father William of the Zodiac!

And I lived that for most of my life, being all super serious, responsible, the scapegoat of the shit of others dumped on me so they could be free… until the serious squared was interrupted by an errant transiting Uranus…

This is the dawning of the age of… me being an escapegoat, and finding fart-arse jokes funny… so funny I fart while laughing my arse off and laugh even more at that.

I’m no longer as afraid as I was of being myself, saying and doing things spontaneously, telling it as I see it even if I’m totally squiffy-eyed in the way I see things…

It’s the decade of embracing myself as I am, of welcoming the old Uncle Tom Cobley and all of messiness… 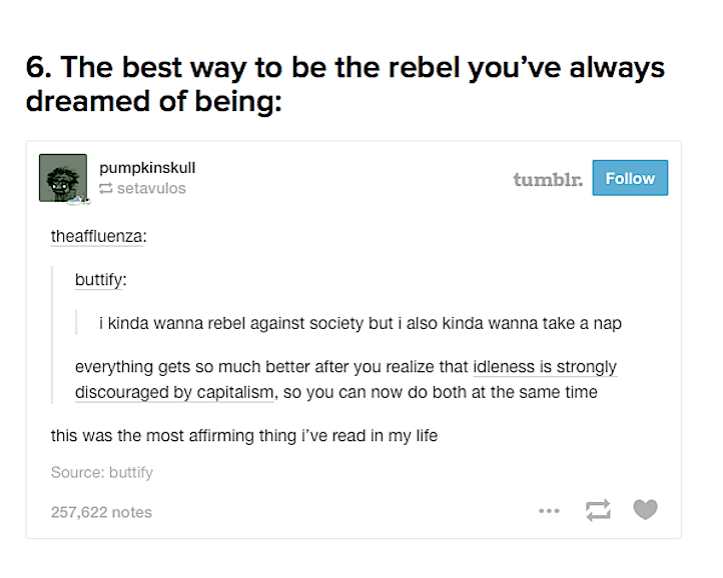 via feel better through tumblr

If you like it… thank you! Much appreciated (now, I’m worrying there’s something as wrong with you as there is with me… cool!).

If you don’t like it… please take your perfect carcass elsewhere! I’m a tiny speck in a vast ocean, why are you focusing your attention on me… shouldn’t that laser be directed on yourself?

I’m not going to change for you just because you want me to… I’ve tried doing that for others, that kind of crazy never works.

Want others to change for you, to suit you, to be who you want them to be for you to be who you want to be, for others to say to you what you want to hear, because you’re afraid of hearing anything else, taking that kind of a risk, a chance, as it might shatter your version of reality or… something like that… please go elsewhere, this place has had enough of doing that. I’ve done my time…

I only play pretend these days if it’s fun and worth the risk… the risks I’m taking aren’t about playing it safe. You have been warned. Listen to the warning and don’t expect me to pretend I didn’t warn you because you didn’t heed it or though it didn’t apply to you.

I get it.. I’ve been there, done that… wished I hadn’t been there and done that because that was a waste of mortal years, but sometimes you have to waste mortality that way to find out you shouldn’t be doing that with such a precious resource… or whatnot.

You’re afraid, perhaps, that when others take risks for themselves, they’ll end up making things risky for you… shit happens… what you do with the shit which happens is up to you – is it fertiliser for your garden, or are you drowning in a cesspit?