For as long as I can remember, I have been shy.

I was fine with my shyness, and being shy, at first because of what it meant to and for me.

– those words and their definitions came later, given to me by others, by those who saw who I was and what I was being to be a problem.

First it was my parents who had a problem with me being shy, it embarrassed them, was awkward for them, made things difficult for them.

Then it was my parents’ friends who had a problem with my shyness, mainly because they had to listen to my parents complain about me and my difficult shyness which was causing them all sorts of problems, such as feeling embarrassed that they had a backwards child who made them look like bad parents when they wanted a better than other children child who made them look like better than other parents good parents.

Then it was society in general who told me through the education institution, through the media of books, text books in school, classic books I had to read for school, fiction and non-fiction books I read in my spare time, comic books, cartoons, television shows, films, and many other ways and means, that being shy was a bad thing = I’m a bad thing for being a shy thing.

But when I wasn’t being shy – this was a problem too.

I was being precocious, impertinent, rude, not staying in my place, speaking when I hadn’t been spoken to, asking questions, questioning the answers I was being given, laughing when children should be never heard, running around when I should be sitting still, quietly, not bothering the adults, not bothering polite society.

The adult world can be a confusing simmering mess of contradictions even when you are an adult.

Eventually I grew up to view my shyness as a problem, and to see my shy self as wrong.

Eventually my shyness and my being shy came to mean to me exactly what the dictionary definitions say they are.

Then one day I came across a new definition of shyness and being shy – Introvert. 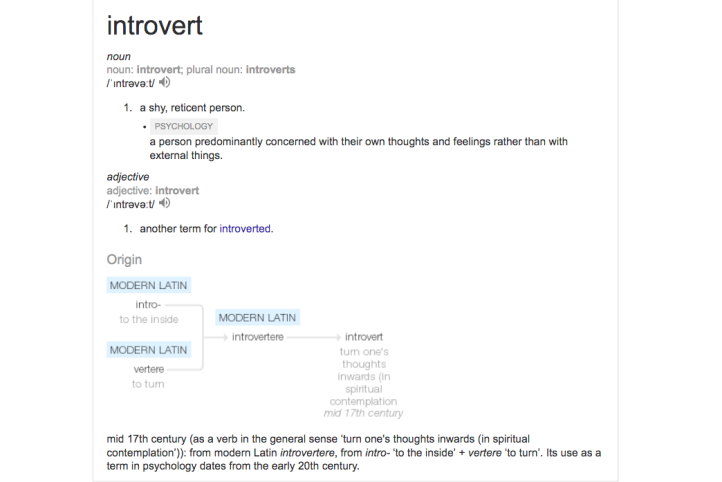 This described to me what being shy and shyness had originally meant to me.

However, when I came across this new definition, being an introvert was the less desirable option between only two options – Introvert or Extrovert.

There were many schools, workshops, life coaches, self-help systems teaching Introverts how to be less introverted and more extroverted like the wonderful charming desirable Extroverts.

I tried to be more extroverted, put myself through a reprogramming program, which only made me feel worse as I kept failing, doing it wrong, bothering people with my problem. I kept being a problem for others, which made them feel awkward, embarrassed, and not want to have me around because who in their right mind would want to be around someone who made them feel so bad all the time. 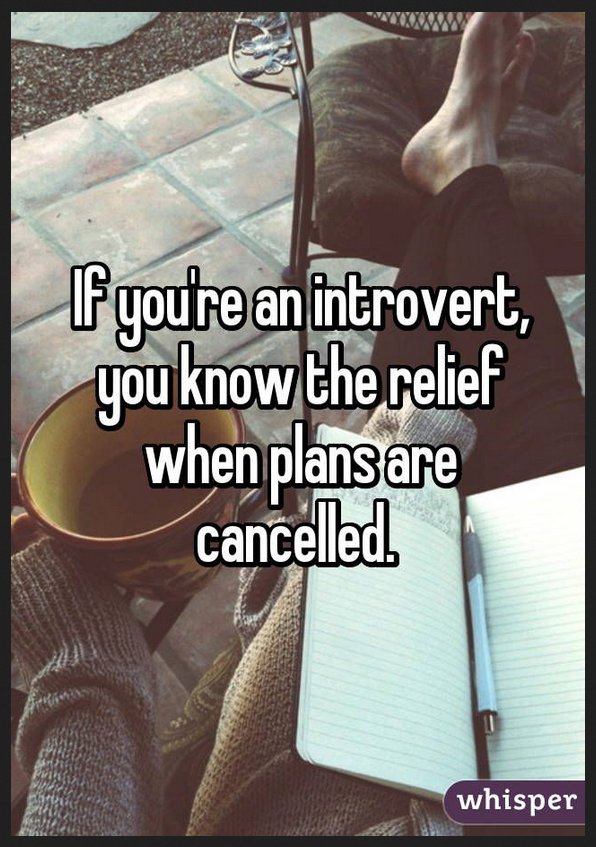 Eventually I gave up trying to be who I was not.

About the time that I gave up, the internet sent me an invitation to visit the world wide web. It took me ages to R.S.V.P with an “Um… okay, I’ll come but I won’t stay long.”

A few years later being an Introvert was the In thing to be online, while being an Extrovert became the less desirable option of the two options, for awhile anyway as the Introverts rebalanced the scales – humans always seem to need to swing from one extreme to the other before they find the sweet spot in between which appreciates both sides equally. 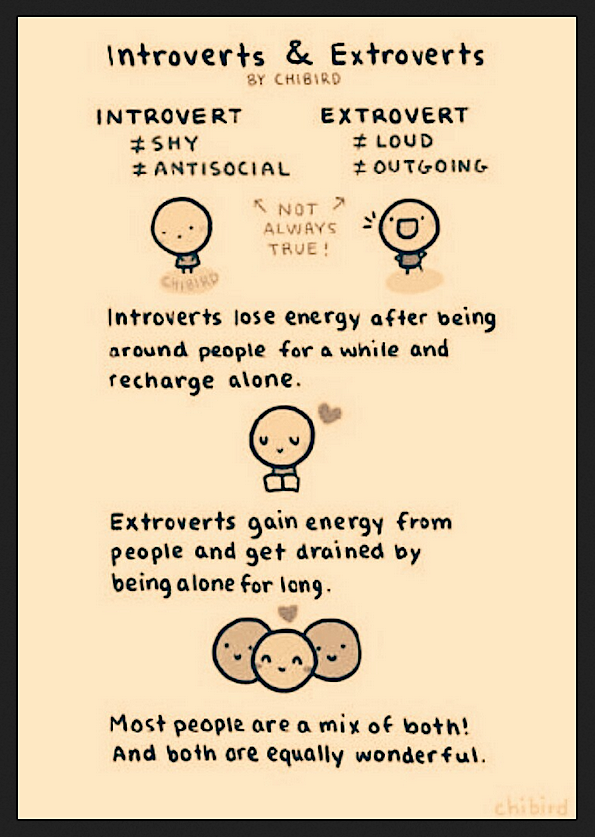 Nowadays there are three options – Introvert, Extrovert, and Ambivert (which is a mix of introvert and extrovert).

Nowadays when I tell people I’m shy I don’t feel bad about my shyness, don’t feel shy about being shy, on the contrary, I’m rather proud of it because it’s taught me a lot about the world inside and the world outside.

Funnily enough when I say “I’m shy” nowadays it usually is a relief for other people, who may be shy too but perhaps were trying to hide it just in case it made me feel awkward, embarrassed, that I was in the presence of a problem.

(these days I tend to say – I’m a hermit. There are many hermits in hermit club!) 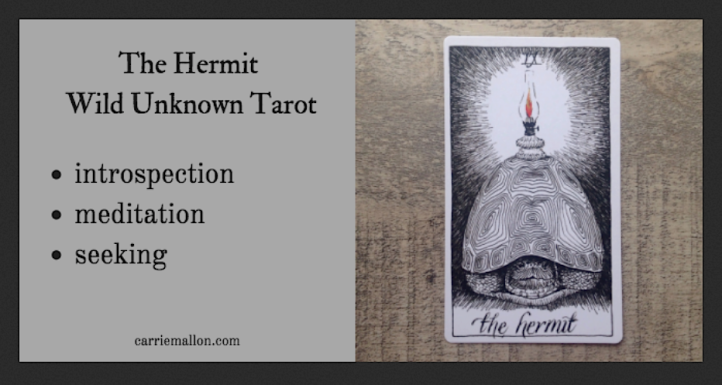 So what does this strange gift of shyness offer the person who has it?

Being ‘nervous or timid’ in the company of other people tends to prompt a shy person to study other people.

To watch them carefully, notice all the subtle messages which they are emitting, all the whispers which leak out of them in their body language, their facial expressions, the tone of their voice, etc.

Our ‘quiet as a mouse mousiness’ and our eyes averted looking at the ground allows us to spot valuable crumbs which others may treat as trash, wasting a resource.

Our ‘fear’ inspires us to explore the source of the fear, to know it, understand it, and perhaps makes friends with the foe. Our ‘problem’ can turn us into problem solvers.

It’s surprising how much people reveal about themselves through the way that they treat you.

And when you’re ‘self-effacing’ people have a way of revealing far more about themselves than they’d be comfortable knowing they had if we were to tell them that they had, maybe our silence isn’t so uncomfortable after all.

Things not to say to a shy person: “Don’t be shy” – this might elicit a response which may reveal to you that the shy person isn’t as shy as you thought they were, and that their shyness isn’t what you think it is, that your definition of shy and theirs differs, and that difference will cause a problem.

Would you tell a sheep not to be a sheep – the sheep in the field near where I live have horns, and they’re not shy about using them. 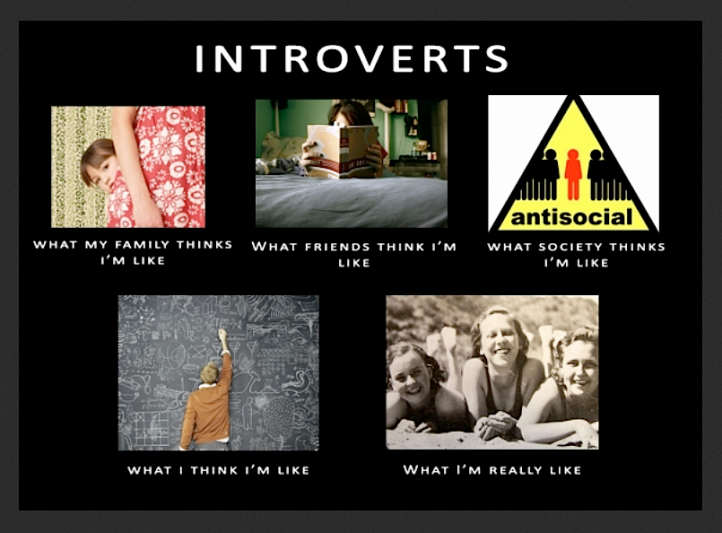 Thank you for reading…

do you have the strange gift of shyness, and what skills has it given you?