The Zen of Narcissists: Lesson #4 – The Female Narcissist is the Greatest Empath in the World!

Here’s a secret for the ears and eyes of Female (and certain males of the species) Narcissists only – No one is as empathic as you are!

If you are a female Narcissist, your empathic skills border on the supernatural. Telepathic empathic. Clairaudient and all the clairs which such psychic abilities endow you with beyond all other psychics (other psychics are frauds, you’re the real thing).

And you’re always quick to tell everyone about them because they need to know how hyper-sensitive you are to them and the slightest change in the atmosphere. You feel things no one else can feel (because they’re not real to anyone but you and your imagination… which is awesome).

You’re a fragile flower whose petals bruise easily and then rot. Other people need to know that they have to walk on tippy toes over the eggshells around you. The Princess and the Pea is an understatement of how easily you are upset by the slightest discomfort, and what upsets you the most is when other people have feelings.

How dare they have feelings! Your feelings are the only ones allowed to exist. They’re more important because you’re the only one who truly feels anything.

Your love is the greatest love ever. Rare. Special. Only given to a hero (or heroine) who can meet your demands… and you have a lot of those, they’re like the heads of a Hydra.

To win your love, a male or female ordinary mortal being must transform themselves through sacrifice and probably death. You’re immortal and can only mate with another immortal… ideally. And ideal love is what you’re all about!

But as special as you know you are…

You’re so unsure of yourself, you need constant reassurance. Try fishing for compliments… 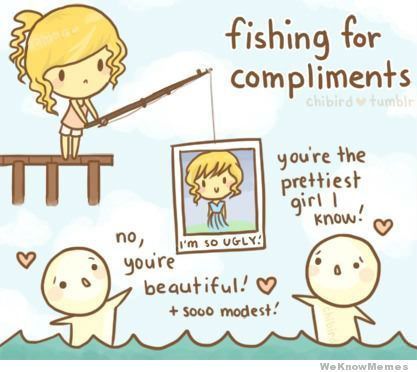 .
You’re so ugly… no, no, no, you’re the most beautiful beauty ever!

You’re so sad 😦 … Oh noes! Why are you soooooo sad! You’re such a loving lovely love of an angel! Who did this to you? What a Baddie!!!

A negative person entered your range of empathy and sucked all your joy and you have nothing left. Was this negative person a friend? Dear, oh, dear! You told them how sensitive you are and they had a personal feeling around you… Oh no! Even worse than them having a sad feeling… They had a happy feeling around you! They were happy because something good happened in their life! That is so negative of them! They knew your life was upsetting you, your miraculous talent of specialness had been ignored once again and you’d been forced to put up with people treating you as though you were an ordinary mortal human thing when you’re anything but that. Your drama is vital… and this selfish friend tried to inflict (cheer you up and share their happiness) their negativity (joy) on you and drained (tried to uplift) you of your special brew of delicious loveliness (heal your wound).

They are so negative, you’d better go and tell everyone else you know, via email, phone, physical contact, and social media, all about them and how negative and bad baddie they are! Spread the word around before they do it  – and maybe others will realise that you’re not the empathic bundle of love and joy which you’ve convinced everyone you are by telling them over and over again that you are with words not actions (as your actions always contradict your words), and they might see you as the insensitive killjoy and permanent damsel in perilous distress who fishes endlessly for compliments to boost your ravenous ego and nothing is ever enough to feed your bottomless pit of need.

Quick quick! Damage control. Control the minds and souls of others! Cover your bloody tracks with rose petals and disguise the scent of rot with perfume! 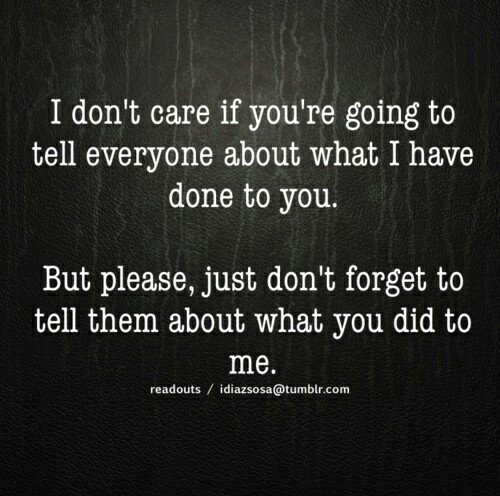 Ah forget your female friends! They’re all envious and jealous of you. They’re only useful when you need some female sympathy and when you want to rub in their faces the tales of all your conquests. Best go and get a quick ego boost by saying something sexually provocative around an unavailable male, and acting in a sexually inappropriate way.

Choose the male carefully, make sure he is moral and that he is one of those men who respects women. Then when you lead him on, he’ll accept your ‘No’ of flirtatious rejection. He won’t understand and his confusion will fill you with Narcissistic supply. But he won’t force you to live up to your promises because he is a good man. You always know how to find the good men. You have an amazing instinct for it! Look at how talented you are! If the men you target only knew how special they truly were they might avoid people like you and find a person worthy of their worth, but you know how to confuse them and make them see what you want them to see.

You’re a mermaid, a siren, an eternal little girl for men (or women) who like little girls in adult female bodies, and a sexy seductress femme fatale for men (or women) who like to be seduced by a real woman they can never have. You’re a succubus, but they only know that when it is too late. You enjoy stimulating their desire, pulling them towards you, then pushing them away. Crying for ‘help help’ then sending them on an heroic quest from which they will never return because they’re trying to save you from imaginary dragons, but the real dragon is you and if they get too close, see who you are behind the beautiful helpless mask, you’ll devour them.

So, sit on your lonely rock in the stormy seas singing your siren’s song, watching as heroes, both male and female, are lured by your distress call which is oh so sweet to their hearts, and enjoy the chaos as they crash upon the sharp rocks which surround you and which tear their mortal inferior human bodies to shreds. You like the human sacrifice because it feeds your ego and the colour of blood because it is red like passion and yours hasn’t been red for a long time. It pleases you…

But not for long.

Oh, you’re sad 😦 …. again… poor you. Did something upset you? Oh, you’re hurt… again… and your hurt runs so deep because you’re so empathic and feel the pain of the world and the world is so very negative and you’re the only positive source of light in the entire universe. It must be so hard and so exhausting for you!

Narcissists Who Cry: The Other Side of the Ego

5 Signs You’re Being Played by a ‘Victim’

The Fake Apology – not about NPD specifically, it does however outline something which narcissists often do.

What’s the best way to deal with help rejecting complainers? – this is not about NPD, however Covert narcissists often behave this way.

This type of narcissist is much harder to spot than Overt Narcissists as the classic NPD traits are more subtle, hidden, less obvious even to those who have a fully-functioning narcissist radar. They often come across as the anti-narcissist, they seem sensitive, kind, caring, interested in you, and they may even claim to be a victim of a narcissist (which could be true if they’re also an Inverted Narcissist – The Inverted (Mirror) Narcissist).

They may also put themselves in a position of authority about Narcissists, as a healer offering to ‘save’ other victims/survivors of Narcissists – the martyr/saviour role is one of their favourite identities as it gives them access to everything they crave, a position of specialness, superiority, and a source of narcissistic supply.

They tend to believe their own delusion, their created identity and version of reality, which is why they are so adept at deceiving others, much of what they do is as hidden from them as it is from others. Their need to hide from themselves who they are is a strong motivator – do not confront this type of narcissist unless that is your only recourse as they will see it as a life and death scenario, with you as the threat to their life. They tend to react very viciously.

The way that you recognise this type is by observing yourself when you interact with them. How do you feel, think, behave, react, when you are with them, when in contact. Pay attention to yourself. If you find yourself censoring your natural way of being, who you are, how you express yourself, and if you do this more and more until you feel as though you’re trapped in a room which is closing in on you, always walking on eggshells around this person, nothing you ever do is good enough, right, okay. That who you are is somehow wrong, hurts them and you need to make up to them for it, be who they want and need you to be. That is how you recognise them.

**Please be aware that although I’ve seen this behaviour more consistently among the female of the Narcissist species, males of the species do this too.

Don’t try and argue with a Narcissist Empath that the vibes and emotions (usually negative ones) they’re picking up from you or others belong to them and not to you or others, because their intuition knows… dum dum dum!… and it’s just as frustrating as trying to make them see anything else.

***This post was inspired by a female Narcissist ‘friend’. She reminded me (of my mother) about everything I had managed to forget about Narcissists due to taking a break from that kind of relationship. But I needed a crash course and am grateful it occurred this way… which doesn’t stop me from expressing my annoyance at this kind of behaviour.

2019 update – For more on this topic, you might find this article interesting: Narcissists Claiming To Be Empaths & Three Methods To Uncover The Truth by Dr. Ava Pommerenk